You Come At The King, You Best Not Miss

The Elvis show opened with “Heartbreak Hotel,” a solid opening number that showcased, among other things, Joel’s pelvis.

Joel came out front and center, “playing” a guitar and giving us his best Elvis impersonation as the girls from the visual squad came running up, screaming. It was a quick hit of an opener, but it definitely got the show off on the right footing.

“Heartbreak Hotel” transitioned into a revved-up version of “You Ain’t Nothin’ But a Hound Dog.” This was a much more traditional, hard-charging show opener. Blake had us playing and marching in 7/8 time in the middle of the song. Mixing meters is something that we experimented with every season, and every season it got more complicated.

“Hound Dog” eased into the gorgeous middle-of-the-show song, “I Can’t Help Falling In Love With You.” Much like “For Your Eyes Only,” it was our chance to show that a drumline can be more than just a bunch of loud drums coming out and banging as hard as they can for six minutes.

Our cymbal players set one cymbal down and played the other with a glove that had washers sewn to the fingers (by the moms, no doubt) so they could kind of graze the cymbal for a nice light sound. We trotted out the mini-bass drums again to make an eight-person bass line, and the tenors played with “puff” mallets. The whole thing was really quite beautiful.

For most of the season, “Can’t Help Falling In Love” was the end our show. Much like the previous year, our real closer wasn’t ready until very late that year. That’s probably because it was the best closer I think we ever put on the floor, “Jailhouse Rock.”

You can see four drum sets in that clip, but the snare line was still only Tom, Joel, and me. We needed a ringer, so we called Tony up to the big show. He was only in eighth grade, but he had been around the drumline forever because his mom was our visual instructor. The boy could flat out play, and he had a buddy. Tony and Shawn were our dynamo eighth graders. Remember when I said we were going to need some talent to step in when Tom and Joel left? These guys were shaping up to be just that. They played tenors for the Elvis show, and they were amazing.

There was this one judge, Donny Lee. We saw him often at shows and he and Blake had struck up a friendship, which might have seemed suspicious if he had ever scored us higher than our competition at Wildwood which he never did. Donny loved Tony and Shawn that year. He couldn’t believe those two eighth graders were playing the parts they were.

There must have been a target on our back that year because there was more competition at Wildwood than we had ever seen. It was no longer just CB West and us. Yet another suburban Philadelphia school, Cherry Hill West, came along. Mount Vernon came up from Alexandria, Virginia.

And then there was Hatboro-Horsham.

I don’t know why Hatboro decided to come to Wildwood that year. Maybe they had a new instructor, maybe they left their circuit and wanted a new one. I don’t know. But I do know that when Blake saw they were going to be there, there was a legitimate “oh shit” look in his eyes. He knew Hatboro, he knew what they were all about. They were like Carlisle and North Penn, the kind of groups we’d get pounded by early in the season when we competed outside of our chapter. We had never experienced this level of competition at Wildwood. But you know what?

Fuck those guys, this is our town.

Wildwood is our town. I don’t care how crisp your marching band uniforms look, or how fast you can play, or how many members of your snare line are marching in corps this summer. We have ELVIS WIGS, bitch. You’re not taking us down. The refreshment stand closes down when we perform. (That’s a true story, actually. The people who ran the concession stand at the convention center closed up shop when we came on the floor so they could come watch us.) We were defending champions, and we weren’t going anywhere.

There may have been five drumlines on the schedule that night, but there were only two that mattered. Mt. Vernon, CB West, and Cherry Hill West all finished at the bottom within seven tenths of each other, and they all finished a full point and a half behind the top two.

Forgive my dad for the shaky camera and the massive yell. He was just expressing exactly what we were all feeling. Not only had we just won back-to-back advanced division championships, we had also just taken down one of the best drumlines in the state. We showed everyone that we were more than just a bunch of wigs and shark costumes. We could play with the big boys, and send them home with silver medals.

After awards, everyone came back to the hotel and talked and hugged and laughed and just genuinely enjoyed the evening. When we all got the “lights out” call, Tom, Joel, Tim, and I retreated to our room and proceeded to absolutely not fall asleep. All of a sudden, there was a knock on our door. Maybe we were being too loud?

It was Blake. He had the room next door. Maybe we were being too loud. 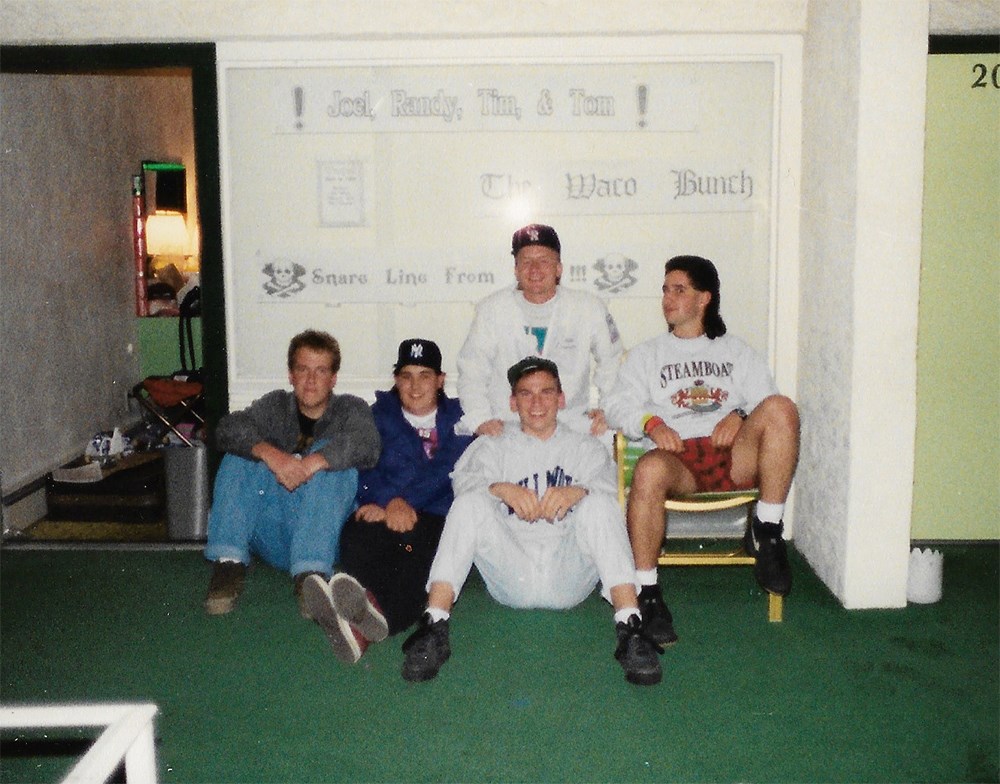 But he didn’t come over to yell at us or tell us to shut up and go to sleep. I think he was just too hyped up to stay in his room by himself. I think he wanted to come hang with his guys.

He sat down on the only chair we had, and we sat on our beds. We talked about the night, about the show, about how happy he was to send Tom and Joel off with a gold medal. It was like staying at Joel’s mom’s camp all over again. And any time the conversation lulled, he just looked at the floor, shook his head, and said the same thing over and over.

“I can’t believe we beat Hatboro.”

Chapter 17 – What Narcissism Means To Me