For Tom and Joel’s senior year, Blake decided we should to take on The King himself, Elvis Presley. Elvis was a good singer, and he probably knew three chords on the guitar. But it wasn’t his musical prowess that made him an icon. It was his legendary performances. Frankly, I can’t imagine a more perfect fit.

I think at this point it’s a good time to note the invaluable contributions of our band parents. If you were to ask Blake what the key to our success was, (I actually did ask him once at Tom’s wedding. I wanted him to point to himself but he didn’t) he would tell you that it was the kids, and it was the parents. Our band moms made our costumes every year, and the Elvis year was going to be a challenge for them.

I don’t know what the hell kind of itchy, hot as hell fabric they settled on, but it was itchy. And hot as hell. Just picturing the conversation Blake had to have with these ladies makes me laugh: “Yeahhh…soooo…we’re going to need about 25 Elvis wigs.”

Actually, make that 24. This was 1993, and Joel rocked the most spectacular mullet the world has ever known. Was 1993 too late to rock a mullet? Perhaps. But we didn’t care. Joel didn’t need an Elvis wig because Joel (kind of) had Elvis hair. And this was crucial because Joel was going to be our star that year.

The drumline wore black jeans and black “leather” jackets reminiscent of the ’68 Comeback Special. The “leather” was actually the thinnest of thin cotton, but who cares. I think there were sequins on the back that spelled out Elvis. (Yet another feat by these incredible band moms.) Joel, however, donned a satin, sequined full-length white body suit, complete with cape, reminiscent of the Vegas, drug-addled, bloated Elvis. And he was glorious. 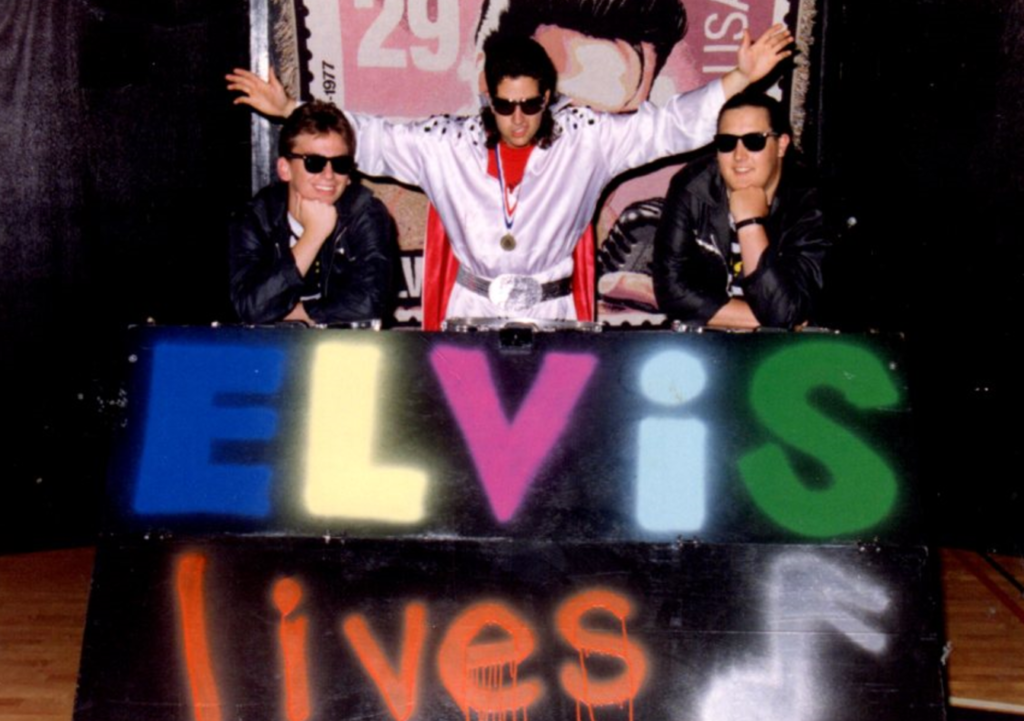 Blake threw everything he had at us that year and we embraced it all. There were now two racks up front for the snares to feature on: the old one from The Beach Year, and a new one that housed four fully operational drum sets. All we had to do was march up to them, put a foot on the bass pedal, and go to work. Where did Blake find enough drums and cymbals to create four complete drum sets for us? I HAVE NO IDEA. But I know he had some help from the band dads.

Those guys were just as amazing as the moms. Band dads drove the U-Haul, helped unload the U-Haul, built the backdrops, and helped turn Blake’s dreams into plywood and PVC realities. Band parents, man. They were without a doubt the fifth Beatle.

Blake decided to go full-on cheese with the beginning of our show. We did a whole “Lawrence Welk” opener. There were bubbles, the music was lame. Then Elvis came busting out, Lawrence Welk got kicked to the curb, and we started the show. It was theatrical and silly, but it worked.

The part of Lawrence Welk was played by one of our runners, Travis. Runners are like ball boys and girls at Wimbledon. They crouch down at the front of the court and run out to pick up your stick if you drop one. Or, at least that’s what runners are in most marching ensembles. But if you were a runner in Blake’s drumline, you had a starring role.

A lot of our runners weren’t musicians, they were just kids on the periphery. Travis was just somebody’s brother who hung around practice until we asked him to start carrying things. Next thing you know, he’s in the group. Next thing you know, he’s Lawrence God Damn Welk, center stage in front of hundreds of people every Saturday. That was Travis’ story, and he’s so not alone.

Tim was Tom’s friend. That was the extent of his resume. He wasn’t in band, never played a horn or marched a step in his life, but he started coming to practice. I think Tom sold him on the experience and he just wanted to be a part of what was going on. So, Tim became another one of our runners. He and Travis were just as integral to the show in terms of performance as any of us were. Again, that was The Blake Way. Everyone matters, everyone plays. Everyone counts.

Just think for a second about what that means to these kids. They weren’t musicians, they weren’t in chorus or any other performing group. But for a couple of minutes once a week, they got to be the center of attention in an organization that was performing at a championship level. Blake put his faith in people, he saw something in these guys that no one else did. He believed in them in a way that maybe no one ever had before.

Tim and Travis were actors now. They were stars. Toward the end of the show, Lawrence Welk tried to make his way back on the court. But Tim came out dressed up in the old shark costume from two years ago and chased him around the floor. Right when he got up to him, he took the costume off to reveal a Spider-Man mask underneath. Blake was doing call backs, man! Call backs! Why did Spider-Man carry Lawrence Welk off the floor? Where did this idea come from? Who the hell knows. But like I say, it worked, and it worked well.

And we were going to need it, because we were about to come face-to-face with the toughest competition we had ever seen.

Chapter 16 – You Come at the King, You Best Not Miss