What Narcissism Means To Me

I totally ripped that title off from Tony Hoagland. That’s the name of a book of poetry he put out in 2003 and it always struck me as funny. But seriously, it’s time for me to talk about me. It’s going to get super awkward, but trust me when I tell you it was much harder for me to write than it will be for you to read.

Going into the fall of 1993, Tom and Joel were gone. The last remnants of the Mickey Mouse show that started it all back in 1988 were all gone. There were no more upperclassmen for me to look up to. I had to be that guy. I was a junior now, and the line was mine to lead.

Blake had me play tenors in outdoor. He added a fifth drum to the tenors, turning our quads into “quints.” I think he always wanted to write for five drums, and in me he had someone who could play whatever he threw out there. I loved it.

Marching band had a “theme” for the first time that year. We usually we just walked out there and played four songs that had absolutely nothing to do with each other and took a bow. But this year, (taking a page from the drumline playbook perhaps?) we had a theme. It was a “western” theme. Everything from the uniforms to the songs to the color guard were all unified under that theme. We even hired a big time show runner. I don’t remember much about him, except he spent way too much time with his shirt off. His name was DeWayne DeWire. Or Dwayne Dwyer… or something. Lane…Pryor? Shane Meyer? Anyway, he was a dick.

We opened with the theme from “The Magnificent Seven,” which was one of the more solid outdoor pieces we ever did. That was followed by our drum feature: “The William Tell Overture.” It was awesome, take a look.

And naturally, we went to ACCs and the drumline finished in god damn fifth place. No silver snare. We weren’t even runners up that year. Our band continued to get smaller, and we had more horn players than ever defect to the drumline. It really felt like the beginning of the end for the Lock Haven Marching Band, and indoor season couldn’t come fast enough.

Tony and Shawn’s exceptional work on tenors the year before was enough to put them in the snare line with me. These would be my guys for the next season and a half. It was an absolute joy to play alongside them. Tony was an uncanny sight reader, and Shawn had the most fluid, gorgeous technique I’ve ever seen (except for me, OBVIOUSLY). They were both so smart and dedicated, I knew we were in good shape. 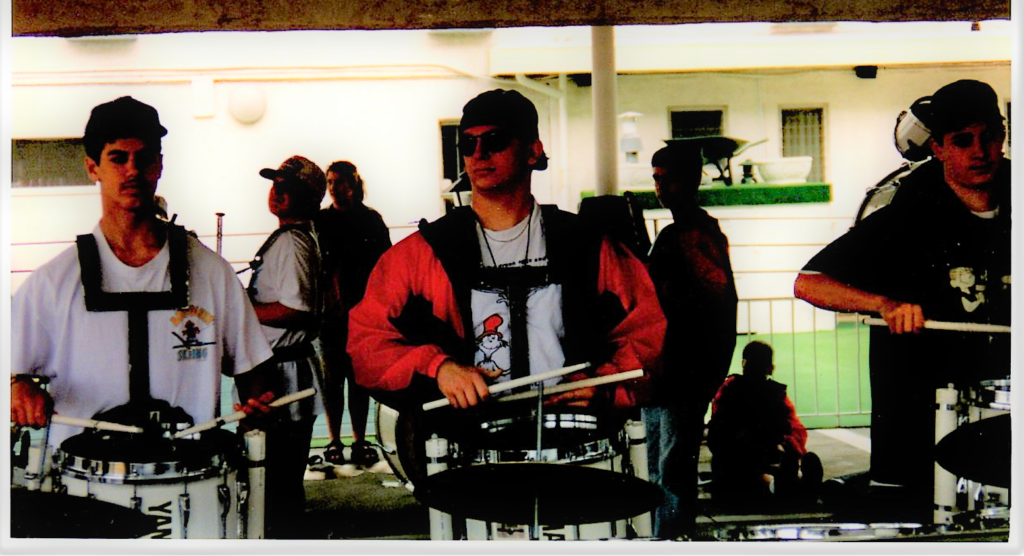 Tony, me, Shawn, practicing at Wildwood.

Tony and Shawn weren’t the only kids showing a lot of promise: Adam, also a sophomore, had some real talent. Cathy and Joel (not him, the other one) were two of the best keyboard players we ever produced. And there was an even younger generation coming up behind them. Jeff, Mike, and Matt were going to be solid drummers. You could tell Joe and Jess were going to anchor the pit someday. These kids seemed to come out of nowhere and brought with them an exceedingly high level of skill.

And when I say “kids” I mean KIDS. This was the youngest our group had ever looked. When I was in junior high (The Beatles Year, The Beach Year, The Spy Year) we were loaded with upperclassmen. We had 35 players in The Spy Year, and only seven of us were in junior high. But now, upperclassmen represented less than half of the line. We still had the same number of members. It’s just that they were all super young.

And here’s why: in 1990, when Tom and Joel were freshmen, they were two of only five freshmen in the drumline. By the time they were seniors, they were two of 13 seniors in the drumline. Their class had almost tripled in size as the years went on. In contrast, when I was a freshman I was one of three. By the time I was a senior, I was one of only four. What can I say, my class was a dud. We were a crazy young group that year.

So the challenge was clear. I had a lot of kids to lead, and I didn’t have a lot of help. Being a leader is about setting an example, not only in how you play but how you present yourself off the court. Blake had prepared me for this. Now it was time to see if I had been paying attention. What was I doing to make everyone around me better? I knew the kind of leadership I saw when I was younger. What could I do to replicate that? The more I thought about it, the more it came down to one question: When you start out at the top, where’s the motivation to improve?

This new generation was coming along when Lock Haven’s drumline was already established as a premier organization. Winning wasn’t a joyous surprise to us anymore: it was expected. We expected to win everywhere we went. There’s a kind of hunger that motivates you when you have to climb your way to the top. So how do you keep it going once you’re already sitting there?

I knew it was my question to answer. I was the only one in a position to pass on the legacy and keep the fire burning bright. These new players were amazingly talented, but would that be enough? Talent was never really what got us to the top in the first place. It was the spark, the undefinable drive, the hunger. (Attack, Attack, Attack..) I had to find a way to take the spirit of the past and share it with the players of the future. These kids were looking up to me. The coming indoor season was going to be my chance to see if I could lead this group to the top of the mountain one more time.

Chapter 18 – Welcome to the Jungle