Do me a favor. Go get one of your junior high yearbooks and take a look at the eighth graders. Holy shit, what a mess! What a collection of Picassos! Noses shifted all over the place, acne scars, teeth that look like they belong in other heads. Eighth graders, man. Woof.

Which is just PERFECT, of course, because that’s the year your sense of self is entirely shaped by the opinions of those around you. I was in the band, and there is nothing more detrimental to a social life than being a band fag. (Sorry, that word was thrown around a lot back then.)

I remember one time in eighth grade there was an assembly in the middle of the school day, probably some pep rally for our middling football team. An announcement came over the speaker in the middle of English class: “Would all marching band students please report to the band room at this time.” For some reason, I froze. I didn’t look up. I was the only band kid in that room, and one of the only ones in my grade. Everyone knew I was in band, what was the big deal? I don’t know, but the thought of standing up and walking out of the room by myself just terrified me.

What the hell was wrong with me? It just speaks to the awesome power of social shaming, real or imagined. I walked into the assembly with the rest of the kids, making sure not to make eye contact with the band already assembled on the court. But I was spotted. Jason ran over to me and grabbed me in the middle of all my non-band classmates. “Get your drum!” He said. I just looked at the ground and pretended I didn’t hear him.

But that was in school. In school, I was still the new kid, the band fag who stuttered. But in the band room, on the bus, freezing my ass off every Friday night watching our middling football team (jk, I’m sure they were good), and at competitions, I was in my element. The older kids really took to me and made me feel so welcome. They were my family. I felt ashamed that I pretended not to be in the band that day, but no one gave me shit for it. Probably because of Rick.

My eighth-grade year was Rick’s senior year. He played tenors. He was tall, good-looking, cool, funny, and had a mullet that made the ladies swoon. He was our leader. He got the biggest laughs, the prettiest girls. We all wanted to be Rick, and I was lucky enough to get to play the role of Rick’s little brother. Rick protected me. He looked after me, which was just about the most amazing thing a kid in my position could ask for. 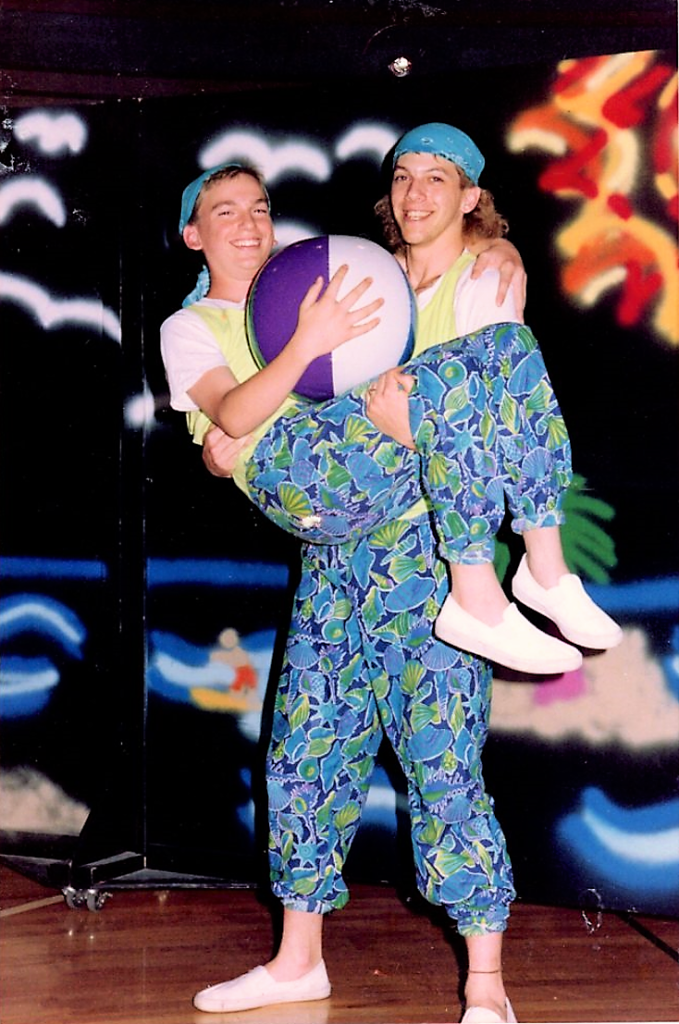 Blake moved me up to snare that year. I was surprised, and incredibly honored. And if we’re being honest, it made me really cocky and turned me into kind of a jerk. I was proud to move up that quickly, but I was too young to know how to handle it with class.

One time, we were in the band room, working on a song that required our cymbal players to turn and hold their cymbals so we could play on them. The room was a mess, and my cymbal player Matt was having trouble finding a good place to stand. Here’s how the conversation went.

Christ, what an asshole.

First of all, “ain’t that the shits” isn’t really something people say, is it. And it’s not like this was some kind of early ’90s, central PA vernacular. I have no idea where it came from. It just kind of…fell out of my mouth. But more to the point, Christ, what an asshole. I clearly thought very highly of myself. (For what it’s worth, Rick laughed about that for about two months.)

I don’t know why Blake put me on snare that year (other than to hasten my maturation process, obviously). We didn’t need the body: we already had Rick, Tom, and Joel, and that’s enough to form a solid snare/tenor line. I never asked him, but I think it’s because he wanted to give me a chance to play alongside Rick for a year.

Blake saw something in me. He saw that I was picking things up very quickly, and I think he was looking five years down the road and recognized that, at some point, the group was going to be mine. Rick would leave, I’d get two great years with Tom and Joel, and then there would be two more years of just me and whoever we were lucky enough to grab along the way (and boy did we grab some good ones). I think Blake wanted to put me next to Rick and let him show me how to be a leader, because he knew I was going to need it someday. He saw a lack of drummers my age and younger and knew he needed someone capable of taking the spirit of those early years and passing it on to the next generation of kids to come through.

Chapter Nine – Son of a Beach