Son of a Beach

1990 was a big year for Lock Haven’s marching band.

We got new uniforms and some sweet new Yamaha drums. And for the first time in a long time, we made it to ACCs. 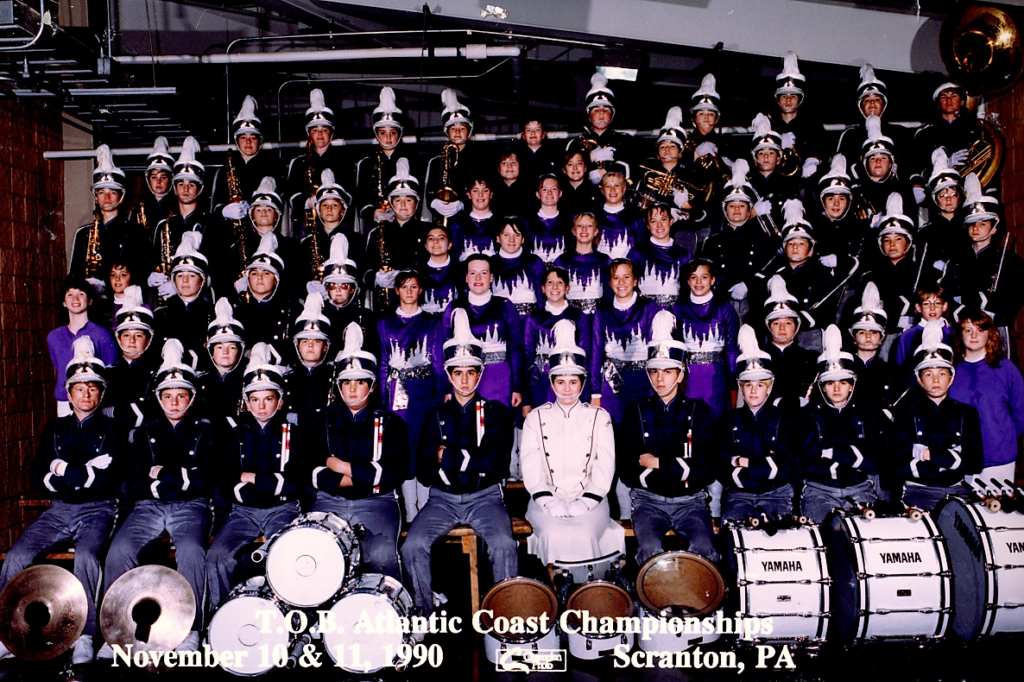 As a drumline, we were good and only getting better. We couldn’t wait for indoor, our chance to go back-to-back, and give Rick the send-off he deserved.

Of course, things don’t always work out the way you want them to.

We did beach music that year, and naturally, we opened with “Wipeout.”

“Wipeout” was the reason Blake created “the rack,” that set of mounted floor toms up front the snares were playing on in that clip. The rack would come to be a permanent fixture in all future indoor shows. The song also had a sort of dance break in the middle that allowed the kids in the pit to come out from behind their keyboards and dance in the middle of the floor. It was a great opener.

We followed it with a light version of “California Girls,” ran through a pretty version of “Surfer Girl,” and closed with a super dope version of the theme from Hawaii 5-0. It was very similar to the previous year: hard-charging opener, light goofy tune, pretty ballad, powerful closer. This would prove to be the general structure for the shows we did over the next few years.

Right at the end of “Surfer Girl,” Blake threw in something else that would come to be a permanent fixture of our indoor shows: the skit. We had someone come out in a shark suit and chase everyone around the court. The shark cornered Allison, one of our cymbal players (she won the role because she could scream the loudest), until our brave hero, Chuck, ran up and jumped between Allison and the shark and “stabbed” it with a harpoon-type thing. Everyone cheered, and we rolled right into Hawaii 5-0. It was goofy, but everyone loved it. Fun was such a central theme to Blake’s indoor lines.

Blake was starting to mix things up musically, as well. He was stretching his mind, coming up with new ways to keep us interested, entertain the crowd, and impress the judges. While the shark was busy chasing everyone around the floor, the snares dropped our drums and hopped into the pit for the beginning of Hawaii 5-0. Rick played a drum set, which I think is the only time we ever used that piece of equipment in an indoor show. It’s such a ubiquitous “drum” piece, but it just wasn’t a part of our performances. Tom played timpani, and I played these cool little “roto-tom” things. I think they were Blake’s personal drums that he just let us use in the show.

Like I mentioned earlier, we were getting better as a group. The material was more challenging, and everyone rose to the occasion. We may not have had an indoor line stocked with drummers, but the players we had were getting very good at what they did. Plus, we were confident, and that’s huge. We were defending Atlantic Coast champions in the advanced division. That knowledge informed our performances all season. We still didn’t get to compete against anyone throughout the season, but our scores hovered in a higher range than they had the previous year. We were consistently scoring in the low 90s well before Wildwood.

The lines we competed against that year were similar to the year before. Bensalem was there again, there was a school from Dauphin County, PA. I could never remember which one, Upper Dauphin, Lower Dauphin, something like that. And then there was Tunstall High School, who came all the way up from Virginia.

For me, the whole Wildwood experience was much easier to manage. It wasn’t new anymore, the whole weekend didn’t come as a shock to me. I knew the hotel, the parking lot, the Convention Center. I was confident, maybe a little cocky. Maybe we all were. We rocked our performance and felt very good about our chances going into the awards ceremony. Rick and the other seniors — three Jasons and a Michelle — stood in front, side by side by side. Bensalem was right there next to us again. I felt like we had this one in the bag.

That’s the worst feeling, man. You’re out there standing at attention and you just want to punch a fucking wall but you can’t because you have to stay professional. Your heart sinks, it’s just a numb, cold feeling. Bensalem and their stupid Batman show (I think that’s what they did) got the better of us that year. We didn’t get our gold medals and a banner to hang in our gym. We got silver medals. They didn’t even hang around our necks, they were just these little things you had to pin to your chest or something. They looked stupid and stunk like failure.

We all felt bad, but I especially felt bad for Rick. We didn’t get to send him out a champion. The whole group really revolved around him. He was our captain, our leader. More than anyone (with the possible exception of Blake), he made the group fun, and he deserved to go out a winner. I remember being more disappointed for him than I was for myself that night.

That was the spring of 1991. Rick was leaving, which meant the end of an era. The group of juniors and seniors who were there when I started, the kids who looked like giants to me, were all gone. But, we had some things going for us. Tom and Joel and I would be the core of the line for the next two years, and there was comfort in that knowledge. Knowing your core is solidified gives you a real sense of confidence.

Plus, we had a huge new crop of kids coming in. Like I mentioned before, I was one of the only kids in my grade in our indoor line. I didn’t have classmates to bond with and come up through the ranks with. But the kids who were coming in as seventh graders — Cathy, Tony, Shawn, Adam, Missy — were a really special group. We felt like we had a great future ahead of us.

And we weren’t about to lose again.