Welcome To The Jungle

Ask anyone who played in the line that year what the theme was and they’ll probably say The Cartoon Year. But there’s also a good chance they’ll call it The Jungle Year.

Blake decided on a “Saturday Morning Cartoon” theme. We would play the themes from The Flintstones, Popeye, Charlie Brown, and George of the Jungle. To be honest, I didn’t see it right away, and I wasn’t sure it was going to hold up to The Elvis Year. But, In Blake We Trust.

The moms came through like champs yet again: the players on the court wore Fred Flintstone costumes, the visuals were our Wilmas. Our “neighbors” in the pit were a sea of Barneys and Bettys Rubble. 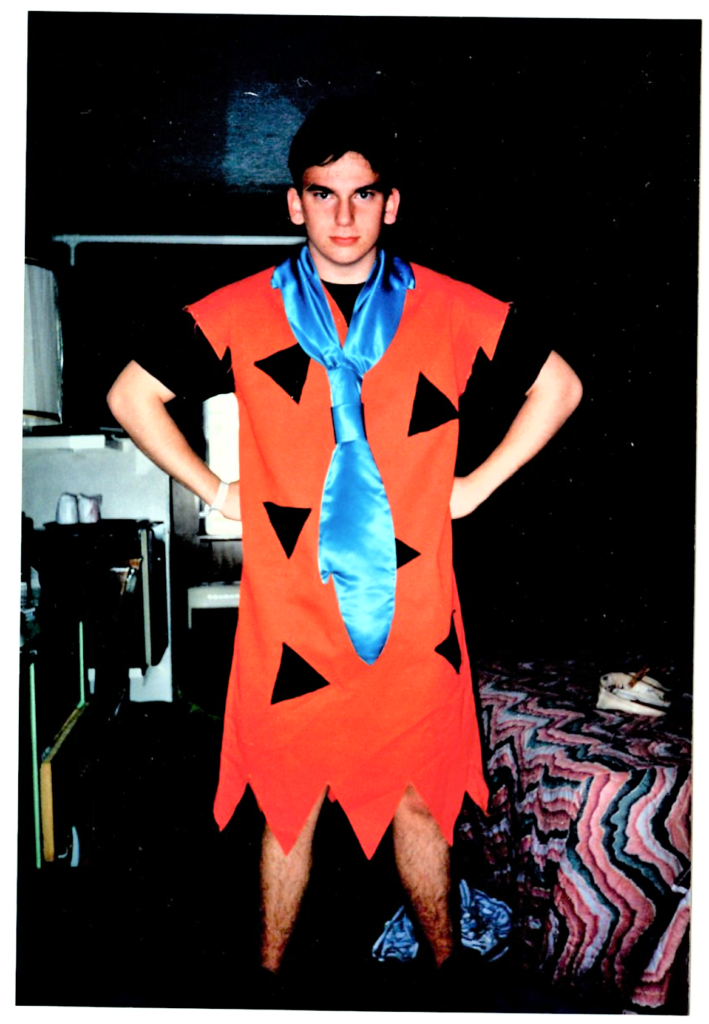 And the dads, oh my God. The dads built a full-size, operational model of the Flintstone car. I mean, look at this thing.

Musically, The Flintsones theme is actually a great song for an indoor line, especially one that was as talented as we were. I might be biased because I’m married to one of them, but the keyboard players were playing some of the hardest stuff I’d ever seen any drumline play. Cathy, Mike, and Joel formed an absolutely killer trio in the pit that year. Nowhere was that more evident than in the second song of the show, Popeye.

It was written to be a tenor/keyboard feature with this brutal run at the end. This wasn’t a fun, goofy second song like we’d had in previous years. This was powerful, lightning fast, show-stopping musicianship at work. Unfortunately for everyone involved, I couldn’t make it work. Blake wrote some serious shit and I just couldn’t make it happen. I think Tony and Shawn could have made it work if I hadn’t held them back. That’s how good they were. Blake ended up cutting our part down and letting the keyboards shine. It was the right thing to do.

Charlie Brown was another goofy, theatrical set piece. We had a runner (named Charlie, oddly enough) put on a huge Charlie Brown head and the girls in the visual squad put on a mock baseball game in the middle of the court while we played and marched around them. Another one of our runners wore a giant Snoopy head. (Everyone plays, everyone counts.)

And by the way, check out where Charlie is standing in this clip. He’s like halfway to the “mound” and is literally inches away from crushing Amy with a metal baseball bat. That would have been a point or two deduction, I think.

After the song ended, the show took a … an interesting turn. In keeping with the morning cartoon theme, we had Elmer Fudd come out with a gun, looking to shoot rabbits. But no! Plot twist! The Energizer Bunny came strolling out, and he shot her.

Now, look, this is where it gets a little dicey for me. It’s really hard to criticize Blake. Like really hard. I’m a 40-year-old man living on the other side of the country and I’m still nervous about what I’m going to write here. But, I think it’s important to present the full range of feelings we had for the shows that he created for us. And this whole Energizer bunny thing was troublesome. The shark and Spider-Man and Lawrence Welk? I mean, that was weird, but it only lasted like fifteen seconds. The Energizer bunny was a substantial portion of our show that year. It felt like the theatrics were threatening to overshadow the music.

However, all that bunny stuff did give us time to get ready for our finale. We did George of the Jungle, (“Watch out for that tree!”) but then it morphed into the most original and creatively satisfying piece of music we ever presented. We broke into this jungle rhythm, totally different than anything we’d ever done. The moms created a unique jungle mask for each player. (Cultural appropriation apparently didn’t bother people in the ’90s.) 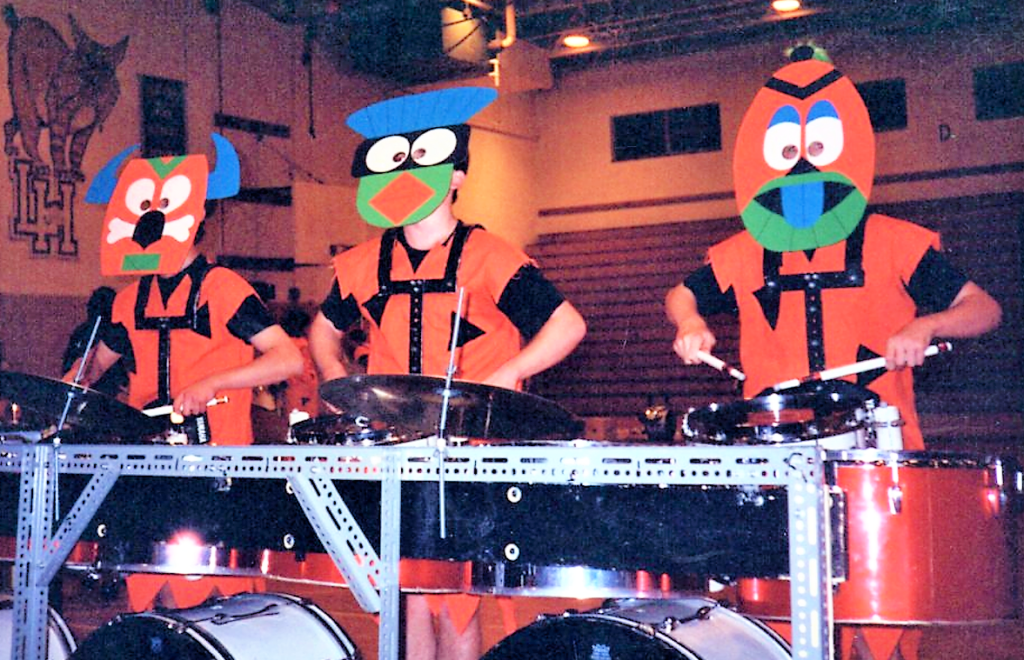 Tony, me, Shawn. I believe Tony is the one with the bone through his nose.

There was a steel drum, the tenors played blocks of wood on harnesses (fashioned by Blake and the dads no doubt), the cymbal players put their cymbals down and played on cups. (You know that Anna Kendrick thing from Pitch Perfect? It was basically that, 20 years ahead of its time.) Cymbals were turned upside down on timpani, we shook metal sheets for thunder, there were rain sticks and other noise makers. Tony, Shawn, and I dropped our snares and danced in and out of each other, playing parts that ran up and down the rack. It was a scene. A wild, amazing scene.

It was so inspired, and one of the coolest things I think the line ever did. But then the Energizer bunny came back out with, like, a machine gun or something and started stalking Elmer Fudd. Right when she was about to shoot him, they kissed, we played “The Wedding March” and they walked away together. Then we closed with the “That’s All Folks!” song and a huge banner.

I mean, I think I get it. Warner Brothers cartoons were weird like that sometimes, and Bugs Bunny did have a tendency to dress up like a girl and kiss Elmer Fudd. But like I say, it almost overshadowed the improvisational masterpiece we presented in the middle. I say “almost” because in the end, it all worked really well together. There was a “General Effect” to the whole thing, a theme was carried through, it was logical. And it was extremely well-received.

Wildwood was a crazy scene that year. There were NINE drumlines competing in the advanced class. As you’ll see in the video below, there would be no full retreat. There were simply too many competing organizations to allow that tradition to continue. Instead, groups sent out their captains. We sent out Allison, Stacey, and Dave to represent us. They were well-deserving of the honor, as they were all seniors and six-year members, which was very rare. (It was only our sixth year at Wildwood.) The rest of us sat huddled together on the floor in the back of the convention center.

As the scores were announced, the numbers grew smaller and smaller (“and in fifth place…” “and in fourth place…”) and our rowdy bunch grew quieter, and a hell of a lot more nervous.

The thing about that score is that, at the time, 98.5 was the highest score Wildwood had ever seen. Like ever. No color guard, no majorette squad, no drumline had ever earned a score that high.

Everything Lock Haven Indoor Percussion stood for, everything Blake stood for, was validated that night. The judges weren’t awarding the highest score ever to a huge school with a polished roster of rigid, technically proficient, bland, musically superior, semi-professional upperclassmen. They gave it to us, a bunch of horn players and seventh graders from the middle of nowhere who made their own instruments and had to fold up the tables in the cafeteria every night so they had a place to practice.

And if you look down at the bottom of that video, near the front of our huddle, right when Hatboro’s name is announced and we’re all celebrating, you can see that there is one person who isn’t jumping up and shouting right away.

I wanted to sit there by myself for a bit before I joined everyone else in the hugging and the crying. These were my kids. I led us to the top, and I wanted to take a moment for myself in the middle of all that chaos and happiness. That 98.5 was proof that I could put a group on my shoulders and reach higher heights than anyone ever dreamed of.

Lock Haven was now the gold standard against which every subsequent indoor organization would compare itself. We pulled off the three-peat. We owned that town. It was a really, really great night.