This One Time, At Band Camp

They were a new concept to me when I moved to Pennsylvania so I gather they might be new to some of you as well. Actually, everything about hunting was pretty new to me when we moved there. “There’s something called Buck Day?” Parents would take their kids out of school to go hunting on the first day of buck hunting season, and since it was like EVERY kid in the school, they just decided to call the whole damn thing off and make it an official school holiday. They had one for Doe Season, too.

Hunting camps are basically just mountain shacks, places where you can go and set up shop while you’re hunting in the middle of the central Pennsylvania woods. It’s a place to stay so you don’t have to drive out to the woods at 3:00 a.m. or whatever god awful hour you wake up to shoot things, and you don’t have to drive home after drinking 17 Busch Lights because you didn’t shoot anything. A lot of people had hunting camps.

How do I know all of this, you may ask, as I have never held a gun or shot an animal in my life? Because when you’re in high school and you need a place to go drinking, hunting camps are ideal. I’ve visited my fair share of hunting camps in my day, though never for their intended purpose. Some were pretty well outfitted. Some were just shacks with refrigerators and cots.

Joel’s mom had one that fell somewhere in between. I don’t know why she had one, as I have never seen Joel with a gun. (The thought of Joel with a gun is actually pretty terrifying.) But his mom had a camp, and it was only about a mile down the road from Sunrise Campgrounds, the place we called home for one week every year in the middle of summer: yes, I’m talking about Band Camp.

Marching Band practice usually started in July, and Band Camp happened a few weeks after. It wasn’t a sleepover type deal. Kids showed up to the high school every morning at a very early hour and bused it out to Sunrise Campgrounds. The place was perfect. It had a huge empty field that was relatively flat, some nice shady trees nearby, a pavilion, a game room/recreation area. Band Camp is where we learned our drill for the season. We’d spend the whole day there, then the bus would take everyone back to school, parents would pick us up, and we’d do it all again the next day.

The summer of 1992 was the start of my sophomore year and my fourth year in band. Tom and Joel were seniors; it was to be our last hurrah. Now, I don’t know whose idea it was, but that summer we started talking about staying out at Joel’s camp together. Me, Joel, and Tom, and Mike. Mike wasn’t a drummer, but he was a big part of our indoor lines. He started on bass drum, but moved over to the pit his senior year and made an already solid pit even better. Plus, he deserves some credit for actually remaining a trumpet player throughout his marching band career. 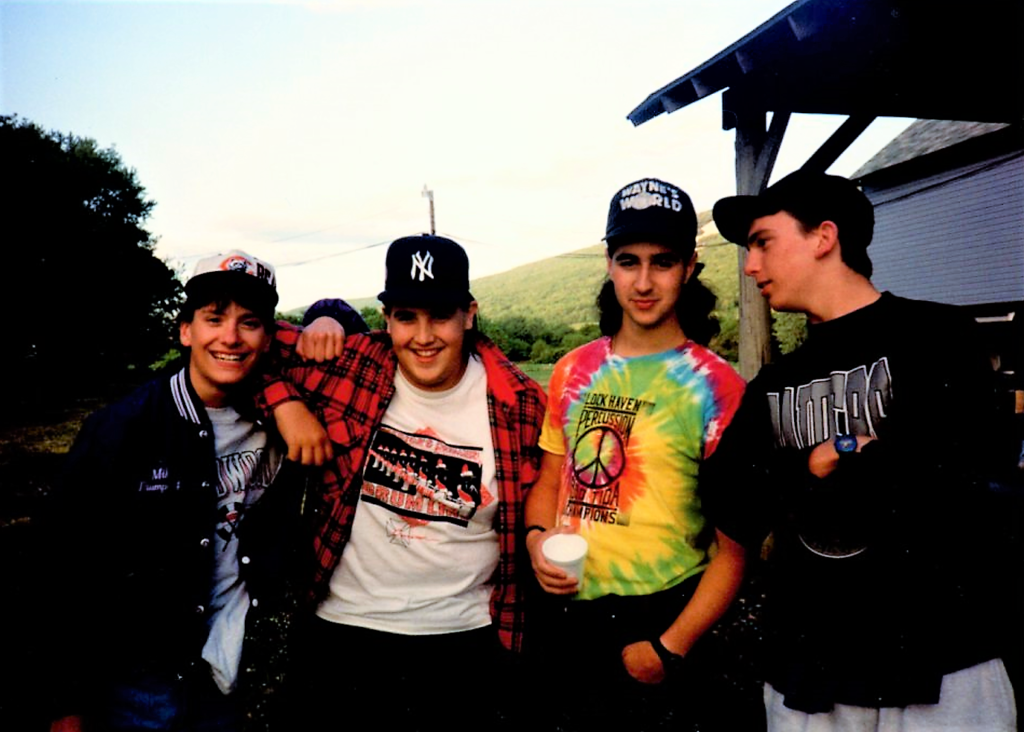 Our parents would never have let us stay out there by ourselves, but they would allow it if Blake were there with us. Hell, it might have even been his idea to use the camp, I don’t remember.

He genuinely liked being with us. We made him laugh. He was our instructor, but there was no doubt in our minds that he was our friend, too. The whole week was a blast. It was like a Wildwood weekend without the pressure. And we didn’t have to sit on the bus for a half hour in and out of camp everyday. We ate hot dogs around a campfire, stayed up late, and talked about the previous season and what we were going to do next.

There was ABSOLUTELY no drinking. Blake was deadly fucking serious about that. He wouldn’t have the slightest whiff of impropriety around this experience, and we totally respected him for that. Plus, we just never really drank that much anyway. We never needed to. I always marveled at that, how we were able to spend so much time together and have so much fun without drinking.

Sunrise Campgrounds was next to the Haneyville Volunteer Fire Department, which had one of those interchangeable letter sign on the side of the highway. Every year at band camp, it always advertised the same event.

Now, “ho-made” is comedy in and of itself, but we had bigger and better ideas in store for that sign. We sat down with a pad and a pen one night and played a little word scramble until we came up with a much more colorful event to promote.

On the night before the last day of camp, we stole out into the middle of the night like the punk-ass vandals we were. There were a lot of confused looks the next morning. I think the sign was changed back by the time the band parents came out to watch our end-of-camp performance, but I can’t be sure. That was one of our prouder moments. (Cathy wants me to point out that we followed it up the next year with Testicles Cream Ovaries 70-7.)

And yes, Blake drove the getaway car. And yes, he laughed the entire way.

Chapter 14 – How Can You Compete With That?