Nobody Does It Better

Anyway, back to that indoor show. Back to The Spy Year.

That was the first year we didn’t debut our full show at the start of the season. Our closer, Spider-Man, wasn’t ready when competition season started in mid-February, so for those first few shows we stopped at “For Your Eyes Only.” I’m not sure if it was because the music was challenging, or the fact that our band moms had to sew 15 Spider-Man masks. They were so dope. They had netting where the eyes were so we could see through them. Sort of. They were hot and sweaty as hell, but the payoff was worth it. Spider-Man wasn’t a long song, but it was a powerful closer.

By the time we got to Wildwood, our show was complete and we were scoring in the mid-90s, well above the previous year. We only had one group to compete against in the advanced class: Central Bucks West, another suburban Philadelphia school. Bensalem decided not to come back. (Booo…)

I don’t know if you noticed Rick in that clip above. He’s down front with Blake because he was one of our graduate assistants that year, and he was our biggest cheerleader that night. You can definitely see him at the bottom of the next video. He wanted us to bring the gold back home just as badly as we did. Graduate assistants were definitely key to our success every year. If you were still in town after you graduated, Blake would offer you the chance to help instruct the line. We always had anywhere from 2-5 members of the previous senior class helping out.

Their help was invaluable, and it really took a load off of Blake’s shoulders. Because really, other than Doug who wrote the keyboard parts and Mrs. Arnone who instructed the visuals, Blake was all we had. He leaned on this ever-rotating group of graduate assistants quite a bit. If Rick was at practice, he could take the snares and tenors down the hall to an empty classroom to work on a particularly tricky piece of music.

And I know Graduate Assistants got just as much out of it as the players did. Drumline is your whole world when you’re in high school. It’s year-round, it’s weekdays and weekends. When it ends, you feel like you’ve lose a part of yourself, and that can be hard. Coming back and spending time with your friends, and helping the group get better can be good for the soul. It was for me when I did it. I loved it, and I’ve always appreciated Blake for giving us those kinds of opportunities.

It was pouring rain at Wildwood that year. Maybe not all weekend, but definitely on the night of our show. We couldn’t circle up outside the convention center like we usually did so our pre-show pep talk took place on the bus. Traditionally, before a performance, we would all stand in a circle around Blake and Mrs. Arnone and the graduate assistants. We’d cross our arms in front of us and hold hands with the people next to us. Blake would talk about the show, what we should focus on, what themes we had touched on in the previous week’s practice. Then he would lead us all in The Lord’s Prayer. Voluntarily, of course. I always thought that was pretty cool, and I’m not a religious guy. I think it was more of a meditative recitation, a way for us all to get in the same head space. 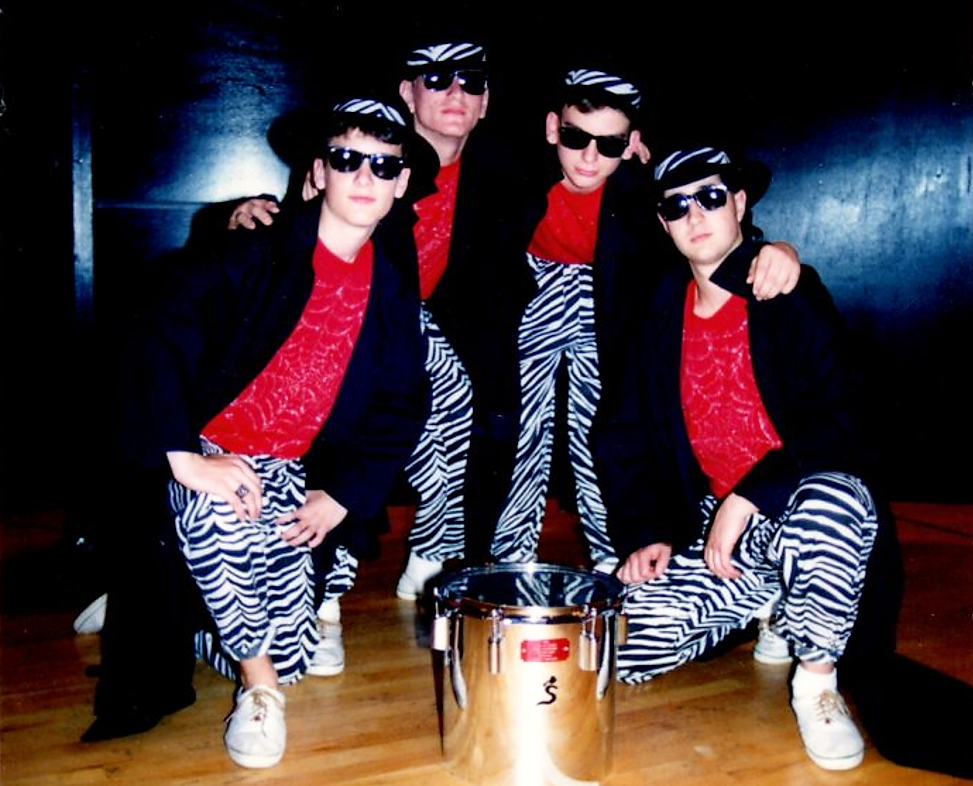 During his talk that night on the bus, he told us a story. Before the season started, he couldn’t decide which James Bond ballad to use as our slow song. It was either going to be “For Your Eyes Only” or “Nobody Does It Better.” He told us that “For Your Eyes Only” made for a better piece musically, but he never got “Nobody Does It Better” out of his mind. And the reason for that, he told us, was the lyrics. Then he borrowed someone’s boom box (he probably had to take an MC Hammer disc out first) and played Carly Simon’s “Nobody Does It Better” for us. He told us to listen to the words, because it summed up how he felt about each and every one of us, and he loved us all very much.

It was one of the few times I remembered him getting that honest and raw emotionally with us. I still can’t hear that song without thinking of that night.

By the time we hit the floor it was like we were floating on air. That was the first time I ever had an out-of-body experience while performing music. That night, during “For Your Eyes Only,” as we marched around the back of the floor, I kind of … flew out of my body for a minute and watched the whole thing from above. I remember it being very beautiful and serene, and there was a real feeling of “We got this.” Like, it doesn’t matter what CB West does tonight. We got this.

I was right, as it turns out, though not by much.

I love how you can hear my dad saying, “Jesus,” as CB West’s score is announced. We had been doing well all year, but that number was shocking. Anything over a 97 is pretty remarkable. And yes, the convention center’s PA announcer had a little fun with everyone with his little “and please note the closeness of the scores.”

Also, I want you to notice something about that clip. Watch the moment CB West’s name is announced. Like I told you before, that’s the moment you know. That’s when you find out you won. Remember when I said that we lined up by seniority? Take a look at the entire back half of our drumline. There is no one standing at attention, no discipline, no Buckingham Palace Guards. Just a bunch of junior high kids going CRAZY. I think that moment is very insightful.

This was a new crop of kids, and it’s obvious as you watch that tape that the kind of discipline instilled in the upperclassmen at the front of the line just isn’t there at the back. Something got lost along the way. I’m not saying our younger members lacked discipline. You couldn’t last two weeks in Blake’s drumline without discipline. These kids were talented and dedicated and proud and respectful. But you can tell that something wasn’t getting passed down the way it should have been.

Chapter 13 – This One Time, at Band Camp