I’ve never encountered a leader like Blake before. He had a way with people, with kids, that I have never seen equaled, and I doubt I ever will.

He grew up in Upper Perkiomen, Pennsylvania, which is an area between Allentown and Philadelphia on I-476, the northeast extension of the Pennsylvania Turnpike. Sometime in the ’80s (I literally have no idea how old he is), he attended Lock Haven University. While he was there, he started helping instruct the high school drumline and eventually became the drum instructor. That’s it. That’s all I know about him. I don’t even know when his birthday is.

But I do know he has a funny accent. Take a look at this map. 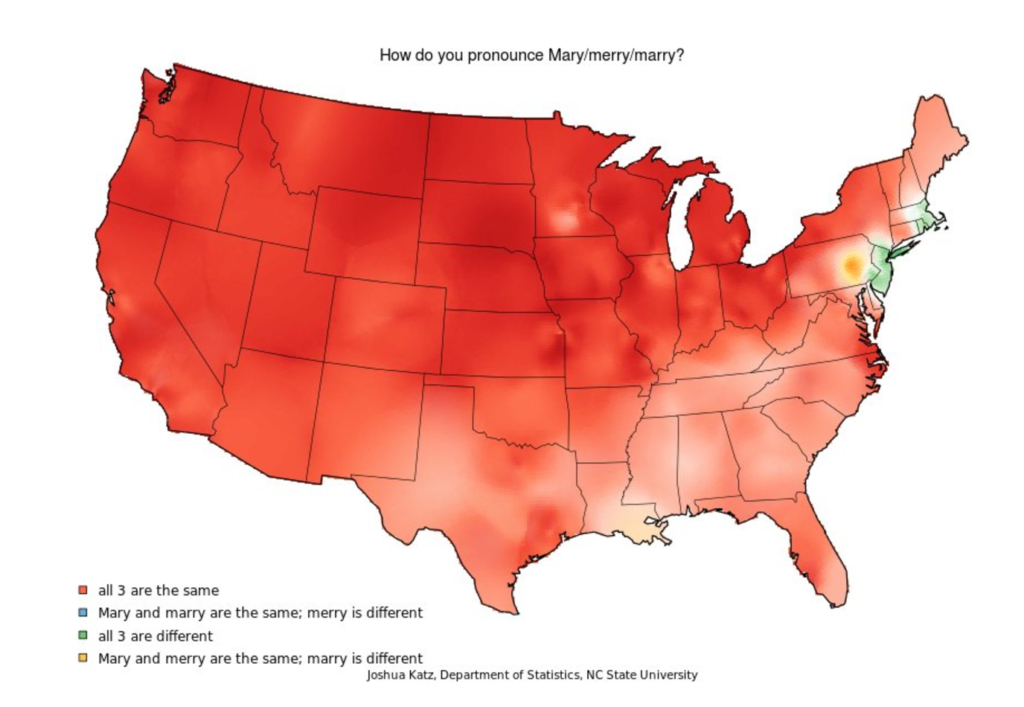 Look at that little orange island in eastern Pennsylvania.

This is a dialect hot spot map. Researchers (these particular ones were from NC State) ask people questions about how they pronounce certain words and then create maps to show dialect borders across the country. They are fascinating. This map shows how likely someone is to pronounce “Mary, marry, and merry” differently.

Look at that tiny section in eastern Pennsylvania, right around the northeast extension of the PA turnpike. They pronounce “marry” differently than the other two. It’s such a unique distinction, and it only happens right there in that little corner of the world. That’s how Blake talked, and we couldn’t get enough of it.

I don’t know if he ever knew that we made fun of his accent. I’m sure he did, I can’t imagine we were that sneaky. We had a girl named Shannon in our line and he called her “Shonnon.” We didn’t have a cannon bass drum, we had a “connon” bass drum. You know how kids are. All it takes is one thing. One little difference becomes a person’s defining characteristic. We never teased him for it, though. Not out of fear. It was more out of respect.

During practices, when he was up in front of the room, we were locked in to him. It was all business because we had a job to do: we wanted to get better, to be the best, and we knew he had the tools to get us there. That, and we wanted to impress him, to let him know how much we appreciated the world he had created for us.

I remember an indoor practice my senior year. It was an exhausting show and he had run us hard for two hours. We were five minutes away from the end and everyone knew it. Kids started to get shifty, maybe a little lazy. He picked up on it immediately. Without yelling, he called us to attention. “Line, Ten, Hut.” And boom, we snapped to it because that’s what we’re trained to do.

And he stood there in front of us, silently, for about twenty seconds. I remember sweat pouring down my face but not daring to wipe it off. Nobody spoke, nobody moved. Discipline. That’s what it was. Discipline, without being disciplined. We did it because we wanted to show him we could.

It all comes back to that gang mentality I mentioned earlier. We were the group we were because of him. The professionalism he instilled in us as performers translated to how we carried ourselves off the court. Under his direction, the drumline was making a name for itself. In our little world of competitive music organizations, people knew who we were. So when we were at a competition, walking around with Lock Haven Indoor Drumline windbreakers on, we knew people were watching, and we knew to act accordingly at all times. Blake was our guy, we were proud of our line, and we were proud of him.

All this, while at the same time putting a raincoat over his head and calling himself Captain Condom.

Sometimes competitions would have these tables with jars on them set up outside the gym. “Vote for your favorite instructor!” by dropping money in the jar with your group’s name on it. Blake won every time. He would get so embarrassed. When they announced his name at awards, he’d have to walk up front and get a medal or a bouquet of flowers or something. It was hilarious.

But really, that was one of the only ways we could show everyone how we felt about Blake. We showed him in practice by being a very disciplined group, but the instructor jars were a way to show everyone just how much he meant to us.

The year we added that “connon” bass to the show, we didn’t have a stand to put it on. So instead of buying a new one (which I know we couldn’t afford), Blake just built one out of PVC pipe. Probably by himself, probably in the middle of the night on a Sunday. Because that’s just the kind of guy he was.

Chapter 12 – Nobody Does it Better