Deb was a senior. She was one of our best indoor cymbal players, but when outdoor season started in the fall she went back to her flute. That is, until her senior year, when she decided to defect. She became…ONE OF US.

Deb wasn’t alone. Michelle, Lori, and Mary had joined her, only they were in the pit. They were tremendously talented keyboard players in our indoor line, and I think they just had so much fun playing together in the pit, they wanted to keep it rolling into the fall. That was great for our drumline. (We didn’t even have a pit the previous year.) But it wasn’t so great for the band as a whole.

This is a trend that started with this group of senior girls and it only grew over time. Our band was hemorrhaging horn players. Kids were joining the drumline in the fall because, frankly, we were a hell of a lot more fun. That was part of “The Blake Way.” Kids just wanted to be around him. Marching band was never as fun as indoor, but if you were in the drumline, at least you got to keep some of that spirit alive. 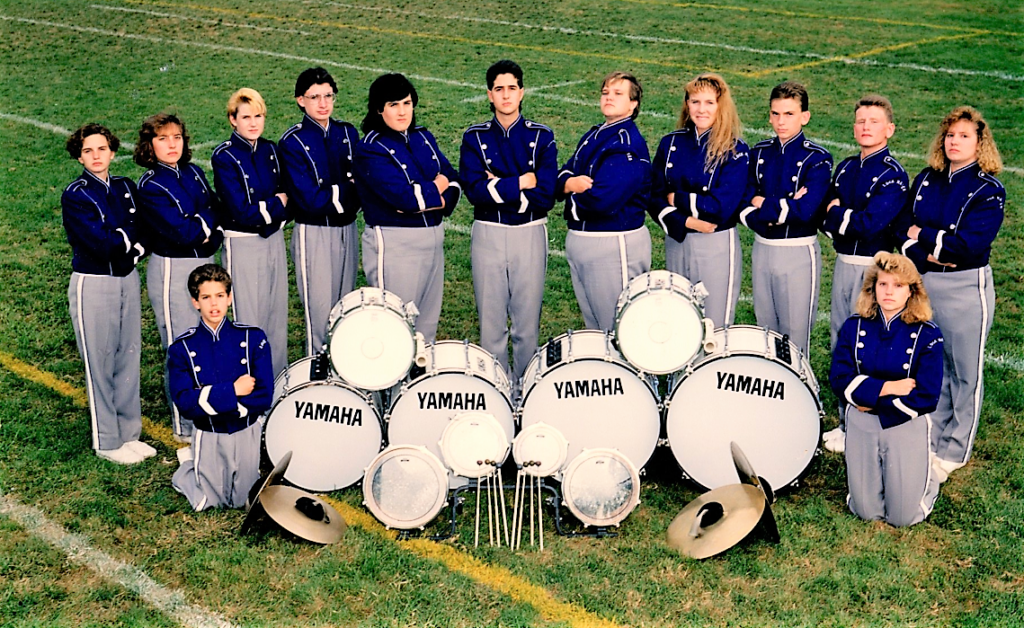 Deb was my cymbal player for outdoor that year. Whenever I needed to play a cymbal during a song, Deb was there. I treated her much better than I treated Matt the year before. Deb did everything I did, except backwards (and in heels). She was really good at what she did. She was also my girlfriend.

A four-year age difference is big in high school, but it never really felt that way. When you’re in band, you’re with these people all the time. Deb and I were good friends who flirted a lot, it just kinda rolled over into a relationship. It was pretty awesome.

Everything about that marching band season was awesome. Things weren’t new anymore. The uniforms, winning best percussion every week, the trip to ACCs, winning our chapter. All the things that seemed so foreign two years ago were now just part of the deal. That was also the first year our drumline finished in the top five at ACCs.

But that didn’t matter; our minds were already on indoor. We had a crown to win back.

Blake had actually told us what that year’s show was going to be way back in May. We would always hold an “after the season” performance for family and friends in our home gym. After the final “Beach” show, Blake circled us up and told us he already had next season’s show in the works. He was so excited for us back then.

It was going to be the “Spy” year. We opened with the theme from Mission: Impossible, which is still my favorite, favorite, favoritest song we ever did. It’s perfect for drumline: hard-charging, powerful, and in 5/4 time. Watch this video of us doing it at Wildwood. Diane, God bless her heart, was maybe a little too pumped up when she started us off. That tempo she gave us when she counted us off on cowbell was insane.

Also, one more note in that video. Watch it again if you missed it, but Becky, one of our visuals, took a MAJOR face plant right at the beginning. (Keep your eye on the group of girls at the back right.) But man did she ever get right back up and keep performing. It was beautiful.

Mission: Impossible transitioned to a goofy version of the theme from The Pink Panther. This is where our skit took place. We had an Inspector Clouseau and a Pink Panther run around the floor, darting in and out of the players on the court, chasing each other.

The Pink Panther was followed by a beautiful rendition of “For Your Eyes Only,” and we closed with the theme from the cartoon version of Spider-Man. Again: hard-charging opener, goofy second tune, pretty ballad, powerful closer.

For “For Your Eyes Only,” Blake introduced another idea that would become a staple. Tom, Joel, and I put our snares down and picked up bass drums to create an eight-person bass line. The sound a snare drum makes really cuts through everything in the gym. It’s difficult to figure out what to do with your snares when you’re trying to translate a beautiful ballad into indoor percussion language. Blake was looking for a really mellow sound, so he just dropped the snare sound entirely and went with basses and tenors only. It worked beautifully.

Now, we didn’t just happen to have three bass drums lying around, especially ones small enough to complement the existing marching bass line. So, Blake took some old snare drums — the ones we used before the Yamahas came along — and converted them. He ripped the snares off, covered them with white contact paper, and gave them new heads. And since we were basically turning a snare drum sideways to play the top and bottom heads, he drilled holes in the sides of the drum and attached new harnesses. It was all very DIY, and it was probably done in the middle of the night because it was the only time he could access the band room. But that’s what made him so awesome.

That was The Blake Way.