The theme for my final indoor year was The Horror Year. The show looked amazing and the music was more challenging than it had ever been. It was my senior year. I wanted to go out a champion.

Of course, things don’t always work out the way you want them to.

You know what’s weird? I don’t have this season on video. My parents spent six years watching me perform through the lens of a camcorder so I’d have a record of everything we did together, but this season is nowhere to be found. (I embedded the video in this post from a friend’s Facebook page so you’d at least have some reference.) Did I maybe just lose that one season? Maybe. These tapes have lived in eight houses over the last 20 years, so maybe.

But I doubt it.

Part of me thinks I just didn’t want to see it again. 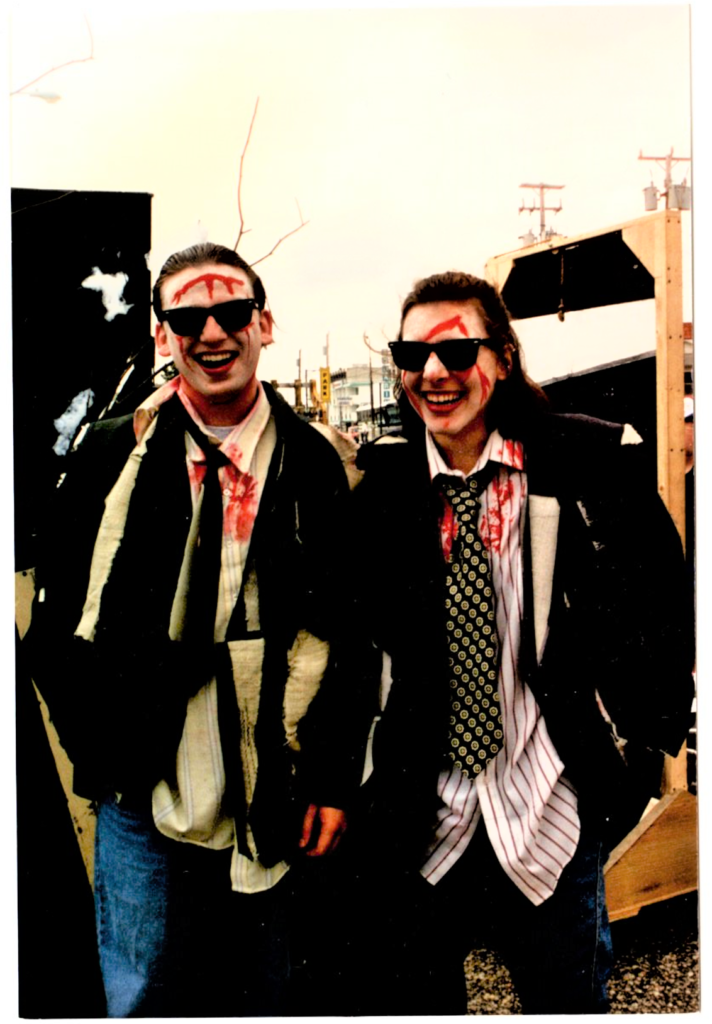 Me and my wife

Costume and set design-wise, we went all out. We were way ahead of the zombie craze (or a decade behind the “Thriller” craze, depending on how you look at it). We bought old Goodwill suits and ripped them to shreds. We wore costume makeup, blood dripping all over, gashes on our foreheads. It looked great. We also enlisted the help of a professional set designer to create a haunted house that made for a spectacular backdrop.

The show opened with the keyboards front and center. While the drummers crouched behind backdrops playing basses and gongs, shaking thunder sheets and playing rolls on cymbals, Cathy, Joel and the other members of the pit played a gorgeous piece of music while runners and visuals moved their keyboards around the floor. It was cool, they were amazing as usual.

Then we came charging out with “Time Warp,” from Rocky Horror Picture Show, without a doubt, the hardest Blake had ever pushed us. Tony and Shawn and I were in our second and final year playing together and I think he wanted to see what we had in us. I’ve never had to actually run and play at the same time, but that’s what he had us doing. “Time Warp” rolled right into the theme from Bewitched, which was just as fast, just as demanding. Blake asked a lot of us in those first two songs and we delivered.

For the first few shows of the season, those two songs were all we had. Our first show was at Huntingdon and we scored a 90. A 90! The first week of the season and we were already hitting scores it used to take us a whole season to reach. The judges scored us based on what we put on the court at the time, and at the time, we were presenting something truly outstanding with “Time Warp” and Bewitched.

It’s just that…we never really figured out how to end it. 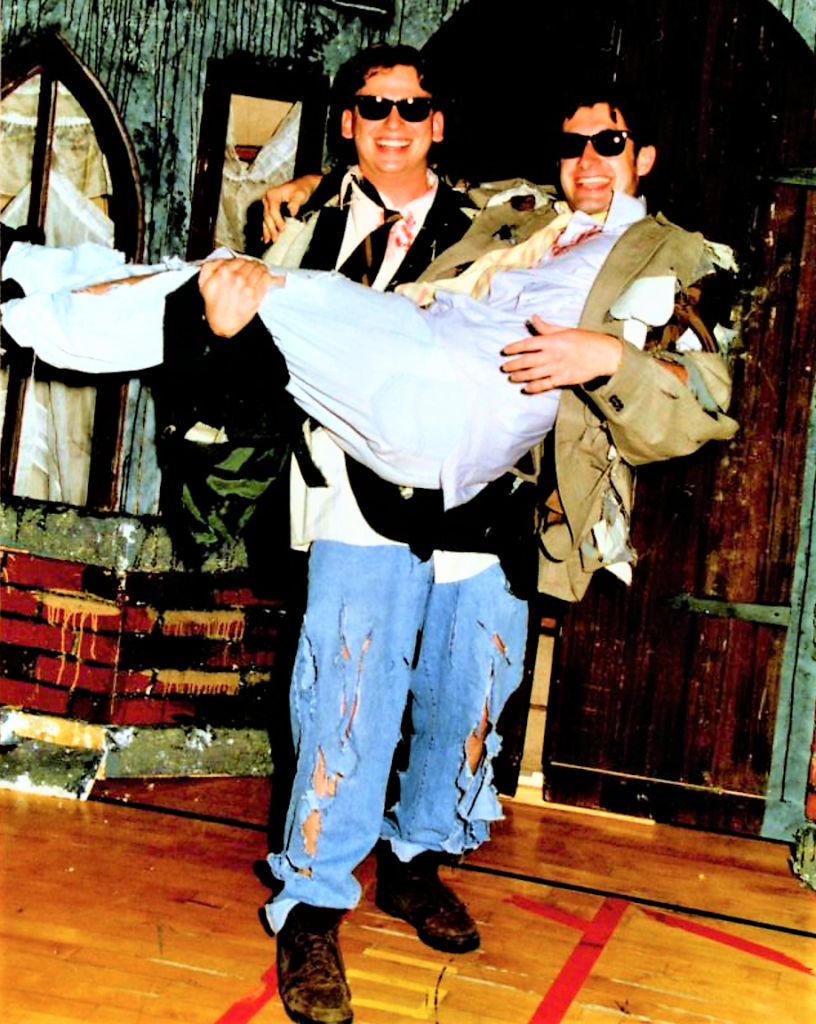 Me and my Joel

There was going to be this whole “Put Your Head On My Shoulder” thing with guillotines and severed heads. There was a Phantom of the Opera bit, we played the theme from The Munsters and The Addams Family at some point. There was a magic trick with a magician who disappeared in a box, but then the box opened and he was on the toilet. We real-time built monsters out of percussion instruments to the tune of that “knee bone’s connected to the thigh bone” song.

And the Energizer bunny had a major role again. Like, but with a Frankenstein head, because there was this whole, minute-long surgery centerpiece. And then there was a sexy bunny, I think? We didn’t know how to end the show musically so we played the run from Popeye again.

It was overstuffed. Bloated and disjointed. There was no cohesive vision so we overcompensated by cramming it full of gimmicks. If The Jungle Year felt like the theatrics were threatening to take over, The Horror Year left no doubt, and I just don’t think the judges could reward us again. The Blake Way that had taken us so high, so far, for so long, just wasn’t there that year. 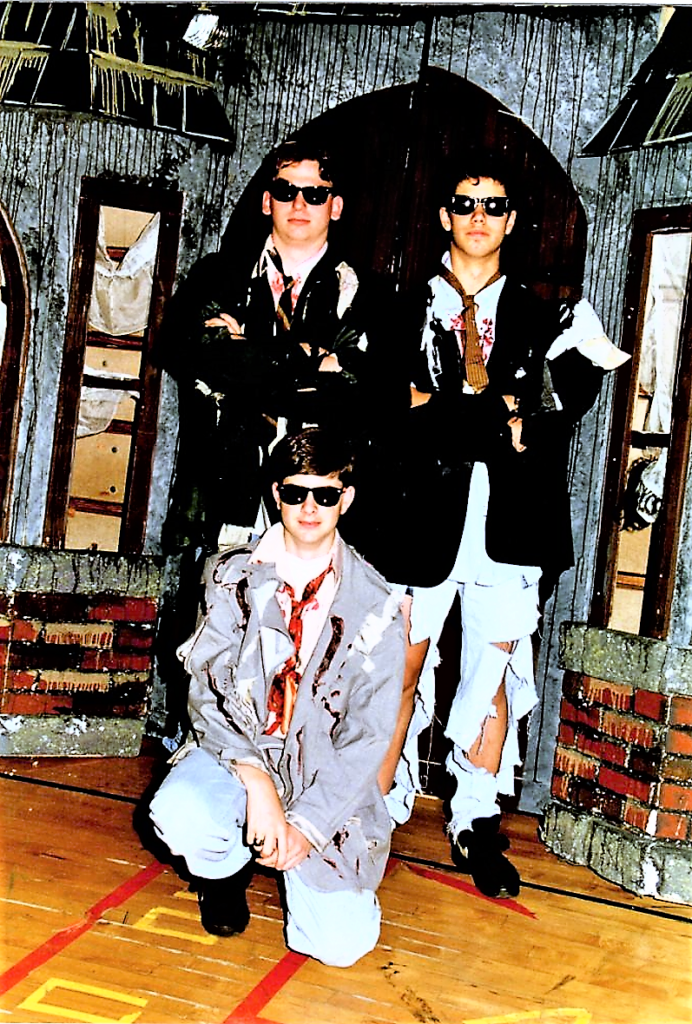 Me and my snare line

It’s not like the kids changed, or the mood was any different. We still had the same talented group. We may have lost a few key players from The Jungle Year but the core was still there. Blake was still fun, indoor was still fun, our heads were screwed on straight. It’s more that, for the first time in a long time, the show just wasn’t there.

I can’t share the awards ceremony with you. I can’t show you video of Joel and I standing up front, collecting our second place medals. I can’t even tell you what our score was.

All I can tell you is there were eight advanced percussion lines that year, another massive lineup. Hatboro stayed home, as did CB West. Another suburban Philadelphia school, however, did not stay home. It was Cherry Hill West, and they won themselves their first gold medal in the advanced division that night.

Were they great? No, not really. They looked like every other drumline we’d sent packing for three straight years. They wore their marching band uniforms and played a boring song no one had heard of. It wasn’t that they were great, it’s that we weren’t.

I didn’t get my fairy tale ending. I wanted to lead my guys up the mountain one more time, but we couldn’t make it happen. It wasn’t the send-off I had hoped for, but looking back, it might have been the send-off I deserved. The way I see it, I had a job to do, and failed to do it.

What if the show was good enough? What if we just didn’t sell it? Let’s take The Elvis Year as an example. Were we objectively better than Hatboro that year? It’s a tough question, but I know this, and I know Blake would tell you the same thing if you asked him: we performed our show better. We sold the hell out of that thing. If that same level of showmanship had been present in The Horror Year, could we have made it happen one more time?

Maybe. But maybe that just wasn’t possible. The level of emotional intensity present in previous drumlines was born out of a profound sense of ownership. We built this. It’s how we rose above our station and became something larger than ourselves. Can you expect a new generation of players who weren’t there from the beginning to bring the same kind of heart? I don’t know. I suppose they would have needed the right kind of leadership from someone with a foot in each world. That’s what I mean when I say I failed them. I was supposed to be the link, but instead I broke the chain. 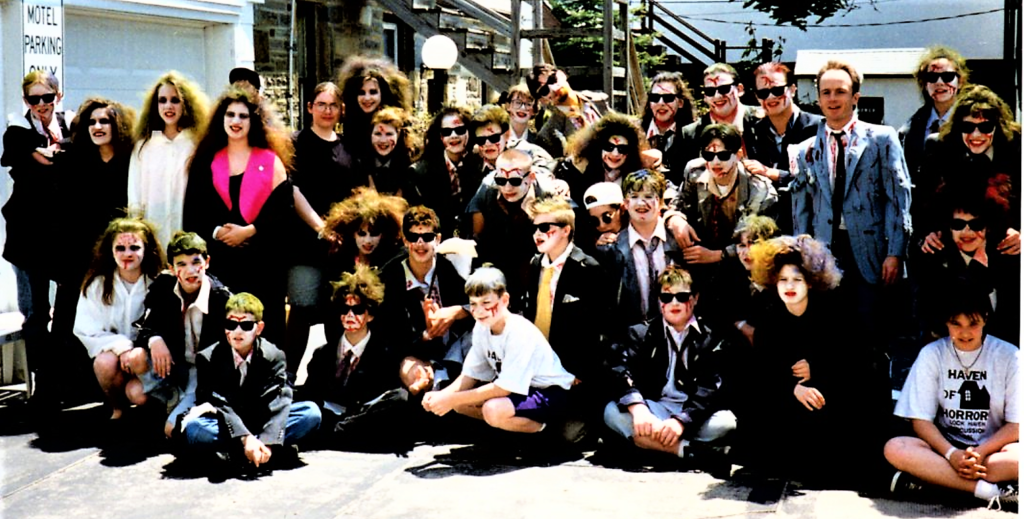 The interesting thing about the kids in that photo is that they never won again. Lock Haven’s reign over Wildwood came to an end that year. The ensemble remained in place for four more years but they never brought another championship home. A school district consolidation changed the name to the Central Mountain High School Indoor Percussion Ensemble, and the group continued for more than a decade. I believe they may have won again at some point, but that’s not my story to tell. Like I said at the beginning, this isn’t the whole story.

This is just a story about a boy who, on a summer day in 1989, was lucky enough to walk into the right band room at the right time.

My time in the group had come to an end. All told, I was leaving with four gold medals and two silver sadness garbage circles. I mean silver medals. It was an astonishing run. Lock Haven’s Indoor Percussion Ensemble was a force to be reckoned with in those days. Drumlines shook their heads and cursed our name when they saw us on the schedule because they knew they were going home in second place. It was such an honor to be a part of it.

The six years I spent in the group meant everything. The friendships we forged and the memories we created together have stayed with me all this time, and they will continue to bring a smile to my face whenever they pop into my old man brain.

Because really, at the end of the day, we were just a bunch of kids. Taken individually, we were punks, nothing more than band kids with dorky hair and good hearts. But something magical happened when we stepped out on that court every Saturday. When we were at the top of our game, we were straight up untouchable.

We soared to dizzying heights, and it happened because we did it together.