So let’s get into the basics for those of you unfamiliar with the world of competitive marching bands.

You’ve seen bands march at football games. Halftime is twenty minutes, which gives a band enough time to get on the field, play a show, and get off before the second half starts. The “show” is created over the summer and perfected in the fall. Songs are chosen, and music arrangements are either purchased or created from scratch, depending on the level of skill and education present in the staff. Music is learned (and memorized) in the band room. Marching, or “drill” – the formations presented on the field – is taught on practice fields in a very slow, deliberate process.

It works like this: everyone is given a starting spot on the field. Then you get your next spot. You’re stationed, say, on the 42-yard line, eight steps behind the front hash mark. Your second spot is on the 35-yard-line, directly on the front hash mark, and you have eight bars of music to get there. Try to stay in line, don’t run over anyone, and for God’s sake, stay in step.

That’s where you lose a lot of people, unfortunately, the whole “staying in step” thing. Music, as you know, has a beat. Even if you’re white, you should be able to tap your foot or your hand to the beat. Marching is just doing that except walking instead of tapping. Keep your body facing forward, tilt your head up, and hit your next spot. Got it? Good, here’s your next spot. And so on, and so on, until the song is complete.

If everyone does his or her job, the people in the stands should see whatever shape the staff designed. You make a nice arc or straight line or whatever. If you’re lucky enough to have 200 people in your marching band, you can spell words and do clever things like Ohio State making Michael Jackson moonwalk.

So that’s it. Play your part, hit your spot. When done correctly, your individual effort blends with everyone else on the field and a smooth, seamless ten-minute performance is born. That’s the beauty of it all: the teamwork. Dozens, sometimes hundreds of individuals working together to create a single, unified sonic and visual experience.

You have to be dedicated and disciplined to make it look good. We practiced twice a week after school, and spent all day Saturday together. Very quickly, you come to realize that these people are your family now. You’re all working together to reach a common goal. It was hard work, but we liked it. We didn’t wear pads, and we didn’t do wind sprints.

But we also rarely had career ending head injuries, so it all balanced out.

Lock Haven is a small town. It had a pretty small school, and that made for a really small marching band.

We had about 60 members when I joined in seventh grade, which was big enough for Group II. It’s like football: your larger schools are AAAA, smaller schools are A. Bands, however, are grouped by the size of the band, not the size of the school. For the majority of my time there, we were Group II, the second smallest of the four groups. 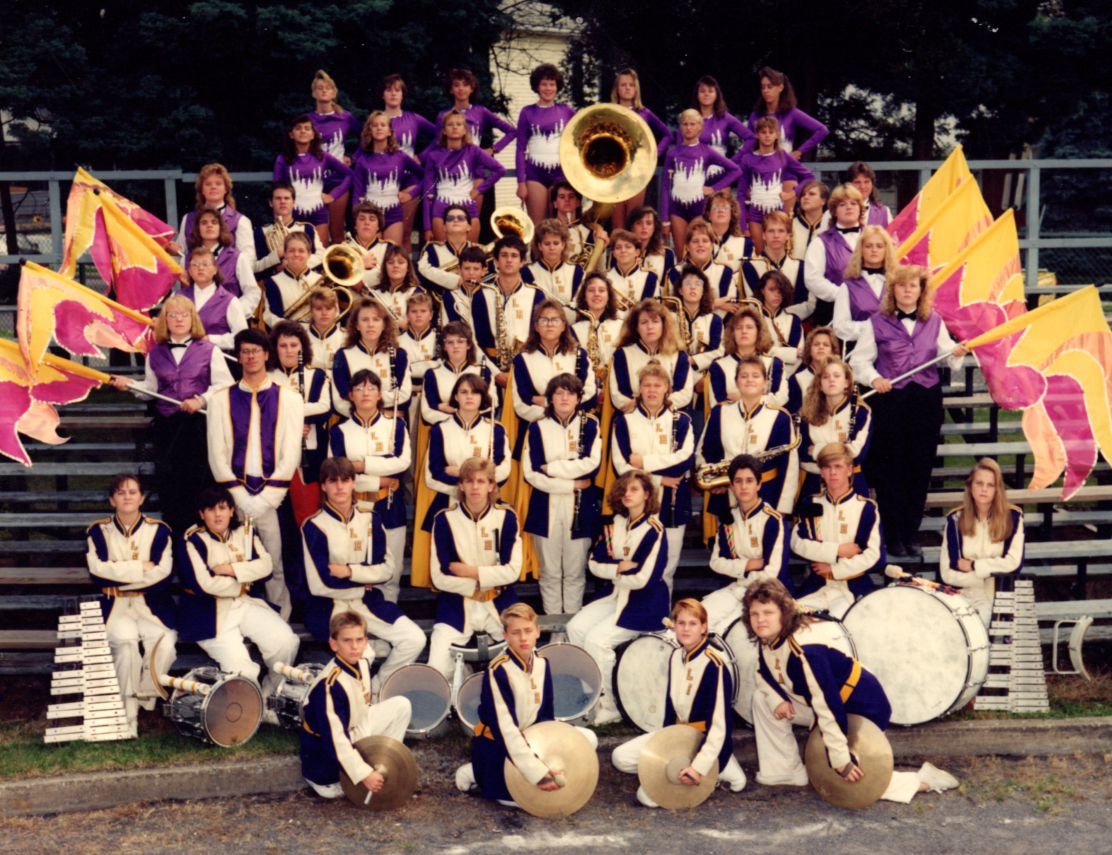 Bands that choose to compete (a lot of bands just do football games and parades) were divvied up geographically into “chapters,” which is just another word for “districts.” These chapters provided the framework that allowed us to compete week in and week out. Every fall on any given Saturday, there are dozens of high schools hosting band competitions across the country. Before the season started, our staff mapped out our competition schedule, choosing which school we would visit when.

Friday nights may have been for football, but Saturday nights were for band competitions. We would bus it to an area high school, suit up, warm up, line up, and take the field for competition. Think of band competition the way you think of gymnastics or diving. We were judged on our performance, given a score, and placed according to the other schools that competed that evening. But unlike gymnastics and diving, our score wasn’t immediately announced. Scores were announced during an awards ceremony at the end of the night.

Our cumulative score was out of 100, given to us by judges both on the field and in the press box. Judges in the press box were concerned with overall structure and performance: do our formations look solid, is the sound balanced properly. The judges on the field were more concerned with performance at an individual level. They roamed the field, closely examining an individual player: is he in step, is she in tune. Because they were standing in our way most of the time, they were often run over. Sometimes on purpose.

In addition to overall trophies for first place and so on, there were also “caption” awards given out to the band with the best Marching, Music, Visual, Drum Major, and Percussion. Each of these captions had its own judge who focused solely on that aspect of the show.

For many bands, the competition season ended at Chapter Championships. But, if you won your chapter, you received an automatic bid to the Atlantic Coast Championships. This was The Big Show, held at Lackawanna County Stadium (which is now called PNC Field, not to be confused with PNC Park) in scenic Moosic, PA. It was easily the biggest stadium we would perform in all year.

Twenty-five bands competed in each group. We made it to ACCs five of my six years in the band, and I don’t think we ever finished higher than 18th. We actually came in 25th one year. THAT was hilarious.

“In 25th place, with a score of [whatever], Lock Haven High School.”
The entire band: (stunned silence.)
Our band director, Steven J. Tribble, clapping all by himself: “WAY TO GO LOCK HAVEN!!!” God bless his little heart.

These scores and placements were somewhat expected. We competed within a nine-state region, and a lot of the schools we were up against were made of money and had thousands of kids to choose from. (Remember, we competed against similar-sized bands, not schools, so there was nothing to stop a giant high school from fielding a mid-size band packed with talent.) So our overall band score never really measured up. The drumline, however, was another story.

The band may have finished toward the bottom of the pack every year, but the drumline finished in the top ten every year I was there. We had four top-five finishes, and came in second twice. We never won the whole deal, which is a bummer. But it was clear to see that the drumline was doing things a little differently than everyone else. And when the marching band season ended in November, that’s when our real season began.