Take a marching band, remove the horns, put them in a gym instead of a football stadium and poof! You have Indoor Percussion.

Xylophones, marimbas, and other keyboard instruments provide the melodies, the drumline does the marching. This construct allows for the inclusion of horn players, just in different roles. It gives you the opportunity to expand a 12-person outdoor drumline into a 35-person indoor drumline. You take kids who played trumpet and put cymbals in their hands, take a clarinet player and put her behind a marimba. That’s what makes indoor percussion such a unique experience.

Like marching band, we competed at area high schools every Saturday, only instead of being separated by size the way marching bands were, we battled against groups with similar skill levels. The division was performance-based.

It’s different now, but in my day there were three categories: novice, intermediate, and advanced. Throughout the season, it was possible to move among the categories based on your score. So, for example, if you started the season in the intermediate division, but you achieved a certain score, you were moved up to advanced. Conversely, if you failed to reach a certain score, you would be demoted to novice.

The problem for us was that, when it came to drumlines, we were one of the only ones in our area. Most weeks, at places like Bellefonte and Williamsport, we’d be competing against ourselves. That’s why once every season, Blake would put us in a show down in the Philadelphia area, or Harrisburg. Some place with rich schools. And we’d see some good drumlines like Carlisle or North Penn and get our asses handed to us. It was always early in the season, so we didn’t have our best show on the floor yet.

All these lines looked the same. They wore their marching band uniforms and played some boring piece of music written by and for band directors. But they were really, really good at it. A huge snare line playing an intricate feature and not missing a beat. Marimba runs flying up and down the keys. Tight formations, difficult steps executed flawlessly. These were huge schools with huge bands that had tons of kids to choose from and only the best of the best made it into their indoor drumlines. We couldn’t compete with those guys on a raw talent level.

I’ll give you an example. 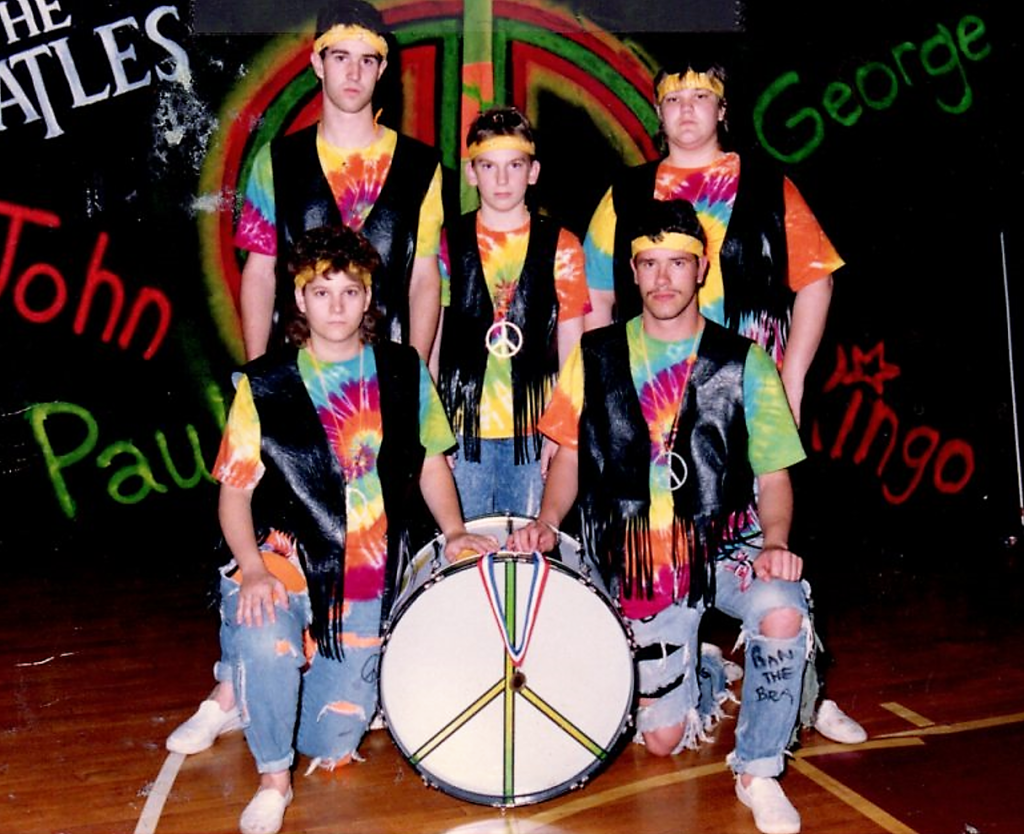 I played bass drum my first indoor season. (I had apparently done well enough with my cymbal duties in the fall to be granted a promotion.) Our bass line played “tonal” parts, meaning notes run up and down the line. From the guy holding the big drum to the little dude up front (me), we marched and played as one. Like a team within the team. But out of the five of us, I was the only drummer. The other four were horn players. Now how is a setup like that supposed to compete with these bigger schools? How can a drumline made up of horn players hold their own against these guys?

Showmanship. We’d have to outperform them.

Showmanship is about style and posture. It’s about how you carry yourself on the court. Judges look for that stuff. Chin up, a purpose to your movement. The players in my bass line weren’t traditionally trained percussionists, but they knew how to perform. Two of them, Libby and Jason, were seniors. I doubt they could play a paradiddle — they probably couldn’t even spell paradiddle — but I’d take them over a trained drummer any day of the week.

I’ll give you an example.

It was my first indoor show. We were lined up in the hallway of some area high school. Costumed out, hyped up. I had butterflies in my stomach. We marched silently through the hall, past empty classrooms, in time to the beat of Rick tapping the side of his snare. Tap, Tap, Tap…

And then Libby and Jason started to whisper something in time with our steps.

There was intensity to it, something I had never felt before. I had a whole marching band season under my belt so I understood pressure and performance, but this was a new feeling. This was leadership. These were warriors preparing their troops for battle.

Singularly focused, locked in. It never rose above a whisper, but it was a whisper you could feel in your toes. By the time we hit the floor, we felt invincible. We marched and played as one, we rose above ourselves. There’s a lot of power in that unity.

I knew that night that I was in a pretty special group, and I felt so honored to be a part of it.