Bull / This is Us

Night Two. Bull, and This is Us. First up, I make Julie watch another CBS show. This is working out great for me so far. I hate CBS. 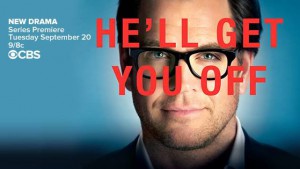 There’s a lot going on. I wouldn’t usually tune into a show like this but I kind of liked it.
A very wealthy young man has been accused of murdering his beautiful drug dealing girlfriend. The family hires Dr. Bull to profile jury members with the ultimate goal of exonerating their son. The family’s attorney meets with Bull and he is very suspicious. He doesn’t put a lot of stock in Bull’s talents. He would rather just stick to old fashioned lawyering so Bull steals his watch, puts a bug in it and eventually returns it to him.
Bull is uber confident. He sits in on the trial and he is so intuitive about the jury that they are actually speaking to him aloud during the trial. Not really but this is how they show us how well Bull knows the jury members. He thinks one juror in particular is the key to acquitting the accused because she looks disinterested and has a gay son.
Bull really doesn’t like the defendant but he’s probably being paid a lot of money to help defend him even though he knows he’s lying…but not about murdering the drug dealing girlfriend.
Things quickly get crazy.
The defense team reveals that a close friend of the family’s daughter who is also in love with the defendant was so jealous of the drug-dealing girlfriend that she wanted her dead (she said so in a text message). Then, outside the courthouse, the drug-dealing girlfriend’s dad opens fire on the accused kid’s dad. He didn’t die so I’m not really sure why they threw that in.
Bull finds out that the defense attorney is open to taking a deal because one of his assistants always listens to him through the bugged watch. The deal would put the son in jail for ten years. Bull doesn’t like to lose at all so this is not an option. Remember he knew the accused was lying?  Yes! He was lying about being gay and so he will likely have an alibi. He has to tell the whole court and his dad who never really loved him that he is gay.
The jury finds the defendant not guilty and then we learn that the mother of the girl who wanted the drug-dealing girlfriend dead is the real murderer and of course Bull figured this out somewhere along the way and shows up with the cops at her house to arrest her at the end of the show.

I liked Crazy, Stupid Love. I didn’t love it, but I liked it. All I know about This is Us is that it’s “brought to you by the people who brought you Crazy, Stupid Love.” So we’ll see. It looks heartwarming. Heartwarming isn’t impossible to pull off, but I’m wary of people trying too hard to make me feel things. That’s why Parks & Rec worked so well. Maybe I should stop talking about Parks & Rec so much.

Halfway through watching this show, I wrote down, “the second act better be something special because this show is pissing me off.” And while I may not describe the twist ending as special, it was at least something. But we’ll get to that later.

We open on Milo Ventimiglia’s butt. It’s a real treat to any Gilmore Girls fans out there who thought Rory belonged with Jess. He’s married to Mandy Moore, she’s pregnant with triplets. There is music playing, it sounds like it’s being sung by a man with a beard. It actually sounds like a beard.

Cut to a fat woman and her battle with food. This is dicey territory, NBC. It can sour on your real quick. Be careful.

Cut to … it’s Chris Darden! Sterling K. Brown. Damn was he good in The People Versus O.J. Simpson. Totally deserved that Emmy. He has a real nice office, it’s his birthday, and apparently he just found his dad?

Cut to a rich dude who is attractive, though it appears he does not like being rich and attractive. Also, he’s weirdly hung up on the Challenger explosion. Cathy wants me to point out that the math is wrong. If he’s 36, he wasn’t in 2nd grade when the Challenger blew up.

Now we find out that the fat woman (Katie) and the handsome man (Kevin) are twins. I should point out that the show opened with some quote about how 18 million people share your birthday. This is, theoretically, the tie that binds all these disparate characters’ lives together.

Here’s how the story lines play out:

Katie’s bummed about her life and goes to an Overeaters Anonymous meeting (or something like it). This is the first time the show really pissed me off. All these people start sharing their heartfelt stories about how hard it is to be fat. I’m all set to dig in and empathize, but the mood shifts because Katie and this dude from across the room (Toby) start laughing at all the fat people and their stories. So, we’re not supposed to empathize with the plight of fat people? What’s the point of her story line thus far then? I don’t understand. Anyway, she and Toby go out and have a nice time. She invites him back to her place.

Meanwhile, behind the scenes of his hit sitcom “The Man-ny” (why the hyphen?), Kevin is sad Kevin because he doesn’t get to do real acting. All people want is for him to take his shirt off. Boo hoo, Kevin. Cry me a river. So he has a nice scene with Alan Thicke (playing himself and doing it majestically), but the director wants him to do it again with his shirt off.

So he has a Jerry Maguire meltdown on set. Everyone films it with their little phones and Mario Lopez gets to play himself breaking the story on E! or Extra! or OMG! that Shirtless McGee has just ruined his career. And how has he ruined his career? He scolded the studio audience for watching bad TV. This is Us, brought to you by the letter IRONY.

And to make matters worse, he gets drunk and busts in on Katie and Toby right when they’re about to get it on. Jesus, Kevin. You’re the worst.

Randall tells his wife Beth (Louie‘s ex wife!) at their kids’ soccer game that he found his dad. He goes to the bad part of town to see him and tell him off. The old man, you see, dumped Randall at a Fire Station and now it’s Randall’s time to tell him off. But the old man is humbled and hobbled (of course) so Randall has a change of heart and brings him home to his palatial, suburban upper-middle-class house. Later, Randall’s dad tells him he’s dying (of course) so they let him stay in one of the seven spare bedrooms.

Rebecca has triplets all up in her. Her water breaks six weeks early. She and Jack go to the hospital where they meet their doctor, Gerald McRaney. He is kindly and old.

Jack is really sweating this birth. Dr. Major Dad tries to calm him down but Jack won’t stop talking. He’s kind of a dick. Later, there are birth complications, it’s touch and go. But more importantly, WHY IS JACK WEARING SCRUBS?! I have (poorly) coached a beautiful woman through two births and I WORE A T-SHIRT BOTH TIMES. STOP DOING THIS, HOLLYWOOD.

Anyway, they lose one of the three babies. Dr. Simon & Simon comes out to sooth Jack again, and does a nice job. It’s a nice moment.

So, anyway, he’s standing there and this dude comes up. Jack’s like, “Which one’s yours?” The guy says, “None, actually.” And as I’m waiting for him to say, “I just like to come and stare at babies,” he says, “I work at the fire station. Somebody just dropped this baby off…”

So that’s the trick, NBC. That’s what you’re up to. Kevin and Katie (and Toby) and Randall and Beth (and William (and Alan Thicke)) are going to exist in the present. Jack and Rebecca are the parents from back in the day. I see.