First up, Julie reviewing Lethal Weapon. This will be Julie’s only review of the evening. Fortunately for us, she means business. 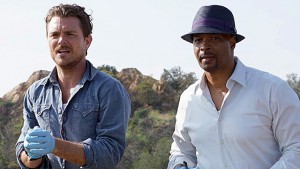 If I ever saw any of the Lethal Weapon movies I don’t remember. This show is totally ridiculous but I am taking my assignment very seriously so here goes.
El Paso, TX–Riggs wraps up catching the bad guy to go meet his laboring wife at the hospital but she gets hit by a truck and she and the baby die. He’s super depressed and drinking a lot but then he gets a call to come back to work but in LA and not El Paso.
LA–Murtaugh is ready to go back to work after taking time off to recover from a heart attack. He is wearing a heart rate monitor that he can and will check frequently throughout the episode.His first day on the job there’s a bank robbery and it looks like there’s going to be a long hostage taking type stand off and then maverick, cowboy, crazy, death-wish Riggs busts in the bank posing as a pizza delivery man. We think he just wants to die but then he ends up killing all the bank robbers. Yeah!  Murtaugh meet your new partner Riggs.
Later that day there’s a dead war vet found on that one trail overlooking LA and Riggs and Murtaugh go to investigate. Riggs thinks he killed himself but Murtaugh is not so certain. They question his shady former employer. He worked security down at the port of LA. Riggs leaves Murtaugh with the employer to go question the even shadier coworker and all of the sudden the other security guards are chasing Riggs and Murtaugh off the property and they all jump in their cars for a high speed chase which actually ends up on the course of an in-progress grand prix race. I’m not making this up. This goes on for a while until the bad guy is somehow back off the grand prix race and back on the main road where he gets out of his car and gets hit by a city bus.
Next Riggs and Murtaugh are trying to explain themselves. The chief is really upset with all the damages (mostly related to disturbing the grand prix). Riggs tells Murtaugh he shouldn’t be a cop anymore because he’s not as risky as he is and that’s OK.
Murtaugh is recapping his day to his wife while chopping veggies as one does and Riggs shows up to convince Murtaugh to solve the case of the murdered war vet but joins them for a family dinner first where the Murtaughs learn about the tragic loss of Riggs’s wife and child. After dinner they will go figure out what really happened to the war vet. Tonight.
They quick stop by the morgue and then Riggs heads to the war vet’s widow’s house and she tells him to leave so he breaks in and then she tells him the bad guys from the docks abducted her 12 year old son and said they will kill him if she doesn’t return the heroin that her dead husband stole. Riggs is going to save the son and wants to do it alone but then Murtaugh shows up anyway. They think they’ve saved the boy but then there’s a sniper situation and so in order to escape the sniper they hatch a plan for Riggs to shoot Murtaugh to distract the sniper and then Murtaugh and the boy will for real this time escape. Instead Murtaugh shoots Riggs in the foot and then Riggs shoots the sniper. Fin. 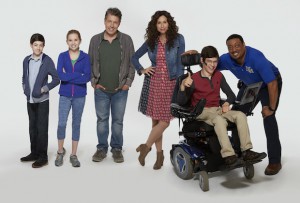 OK so not bad. I didn’t know anything about this show until I started watching it, which is nice and rare for me. I usually put too much stock into what critics have to say and then subconsciously bend my will to like whatever they do. It’s the whole Garden State thing all over again. But enough about me.

ABC’s been having a good run with sitcoms and Wednesdays. Modern Family is what it is, but more recent additions like blackish and Off the Boat have been well received. This looks like it could join those. But what do I know.

This was a good show, I think. It’s about a family led by a hard charging mom, trying to provide a normal life for their son named JJ with cerebral palsy. She thinks she’s found a new school that will provide JJ all the help he needs to have a perfectly, normal life. But the school turns out to be nothing of the sort.

We spend a lot of time with the other son, Ray. A lot of the episode is about how hard it must be to have a brother in that situation. So much of the family’s energy and dedication is directed at JJ, it can be hard to think that anyone even notices you.

But the family seems well adjusted and definitely seems to enjoy each other and laugh with one another. It’s hard to tell where a show’s going to go based on the first 22 minutes, but I found myself enjoying Speechless more than I didn’t. It didn’t seem preachy or heavy-handed. Minnie Driver looks amazing for someone I haven’t seen in 18 years. And the actor who played JJ was very charming and natural. I could watch this again. 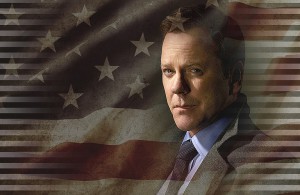 “What if someone blew up the Capitol during the State of the Union?” Well, if you’re a dad over the age of 60, you were legally obligated to buy and read all of Tom Clancy’s books in the ’80s and ’90s, so you know this is well-covered territory. But here we have Kiefer Sutherland executive producing and starring in a televised version of that very scenario. So here we go.

HUD Secretary Tom Kirkman sits out the address this time. He’s got his hoodie on, he’s relaxed, in a bunker. Well it’s not a bunker. There’s cell service and a window with a nice view of the capitol.

Later, during a flashback, we learn he was about to get fired. Some might say that throws his legitimacy into question. Not me, though. I don’t give a shit.

And by the way, if any of you thought there was going to be a moment where a very serious man whipped his head around and looked Secretary Kirkman in the eye and said, “Sir. You’re the President Now. [pause] OF THE UNITED STATES,” you were right, that’s exactly what happened.

The show does a good job positioning him as kind of a weakling. A professor. Jack Bauer would know what to do but this guy doesn’t. He’s scared. He throws up in the bunker bathroom.

And speaking of the bunker, of course the “general” has to be a hard-nosed military man who wants to blow up everything and no HUD Secretary is going to stand in his way. Does there have to be conflict? Can’t we all just get along down here in the bunker?

GENTLEMEN, THERE WILL BE NO FIGHTING IN THE WAR ROOM. (h/t Dr. Strangelove)

Look, I generally steer away from shit like this. I haven’t enjoyed an action movie since Die Hard. That’s not true. I liked 24. But 24 this ain’t. Maybe I’m just tired, but Christ, this show was dull. I think this is one of those where if you wanted to like it, you did. So keep on keepin’ on. I’m gonna go watch a Parks & Rec rerun on Netflix.