Kevin Can Wait / The Good Place

The Emmys were on last night and, if you’re like me, you made your family shut up and leave the room while they were on. Not really, but I have a very serious relationship with award shows. It combines my love of entertainment with my pathological need to know who wins things.

A lot of good things happened last night. Anytime Tatiana Maslany, Aziz Ansari, and Key & Peele get up and accept an award, it’s a good night.

Although it wasn’t necessarily a good night for the four major broadcast networks. ABC, CBS, NBC, and FOX have been putting a lot of lowbrow trash on the air for years now. Of the 27 awards handed out last night, only four went to a major network (and none went to CBS): one was a reality show, one was a live musical, one was a late night show, and one was a miniseries.  The four major networks put out 147 scripted shows in 2015 and not a single damn show won an Emmy.

Nevertheless, they press on. They keep creating terrible shows because they know we’ll keep watching them. It’s premier week. All of your old favorite shows are back with new episodes, and the big four networks are debuting a dozen pilots this week.

And I’m gonna watch them all.

Well, not really. I have help. No one could be expected to tackle such a monumentally ludicrous challenge single-handedly. So I made my sister join me.

OK, here’s Julie with her review of Kevin Can Wait. 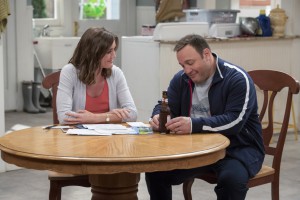 Kevin James claims to feel at home on the set of a sitcom but I think his brother just needed some more money and Kevin wanted to boost his confidence by working together again instead of just writing a check.
Kevin James is newly retired NYPD with three kids. I think his wife might be a nurse because I think she has scrubs on.
They’re interviewing tenants for a rental property. It’s so random. Why are they only interviewing old people? That is kind of sad. Also where is this property?  Is it somewhere in Queens?  I’m just assuming that’s where they live. Or wait, are they renting out their basement? I’m super distracted by this sub sub plot. Oh OK, they are renting the room above the garage to supplement retirement income. Maybe I missed that earlier…
I hope I’m not expected to watch the whole season. I like some shit TV but this is pretty shitty. I like to fall asleep to shit not actively watch and critique.
Anyway, eldest daughter away at school brings her BF to retirement party and “surprise!” turns out to be engaged and he’s a big dork that KJ doesn’t like. She’s dropping out of school to go back to waiting tables to support her fiancé until he makes it big with some computer program.
So now to keep his fave daughter from dropping out of school, he has to go back to work and not rent out the garage because the daughter and her dorky fiancé are going to live there. But he still gets to have some retirement fun with go-karts and paint ball while music plays at the end.
I think the highlight was the retirement party cake with fondant icing crime scene. 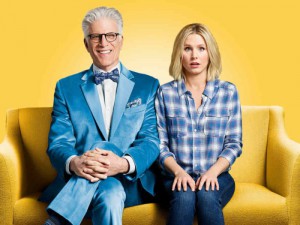 The Good Place immediately reminds me of Defending Your Life, the incredibly brilliant Albert Brooks movie about what happens when you die. It moves on from that premise eventually, but it’s clear that the movie was an inspiration.

Kristen Bell plays Eleanor Shellstrop, a woman who has just died. She wakes up in “The Good Place” a construct that closely resembles the world she left, and is intricately designed to suit her life to a tee. Eleanor was a good person, a lawyer who got people off of death row and saved starving children somewhere.

Eleanor is introduced to The Good Place by the neighborhood’s creator and boss man, Michael, played by Ted Danson. Michael shows Eleanor her new house, her new life. He introduces her to her soulmate. Everyone in The Good Place is guaranteed to spend eternity with his or her soulmate. Eleanor gets her soulmate, Chidi, a Nigerian college professor, alone in a room, and proceeds to drop a bomb on him.

There’s been a mistake. This Eleanor wasn’t a good person. She was a terrible person who ripped off old people an generally led a deplorable, selfish life. There’s a glitch in the system.

Soon enough, terrible things start happening in The Good Place, all of which seem to tie back directly to Eleanor. It’s only a matter of time before the glitch is discovered and she is sent away to The Bad Place, which we only catch a brief audio snippet of. It’s not good.

So she enlists the help of Chidi. She thinks that if she can pull off attempting to be a good person, she’ll earn her stay and everything will be good. This is the general set up.

The Good Place is created by Michael Schur, who honed his TV chops on The Office, then went on to produce two of the most amazing, hilarious, heartfelt shows on network TV: Parks & Rec and Brooklyn Nine-Nine. And he’s not alone. He brought along Dan Goor, Alan Yang (who just won a co-writing Emmy with Aziz Ansari for the brilliant Master of None), Megan Anram, Joe Mande, and Jen Statsky, and probably a half-dozen other writers and producers from those shows.

This is an impeccable pedigree. I will give The Good Place the benefit of the doubt because 1) Michael Schur can do no wrong, and 2) as we shall see this week, TV shows should rarely be judged on their pilots. I know that’s technically what we’re doing here this week, but I’ll have patience with this show. The pilot for Parks & Rec is nothing like the warm, funny, smart show it turned out to be.

So yes, Eleanor is unredeemable, her supporting cast seems awfully one-note and uninteresting. But Kristen Bell makes it work and Ted Danson is sitcom gold. Also, he was amazing on season 2 of Fargo but that’s beside the point.

OK, that’s it! See you tomorrow. And yes, I think we all agree that Julie should have to watch Kevin Can Wait all season long. Right? Right.