Julie has paid her dues. It’s night four and she finally got some TV worth watching. 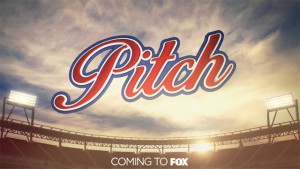 Everything I’ve watched up until now has been a joke but I’m enjoying this. I have two young daughters and, like any parent, I want them to achieve all of their dreams, or at least feel empowered to pursue anything. So I’m feeling pretty excited about the idea of this show.

The GM and the owner are super pumped for ticket sales, but the crotchety manager (Kevin Arnold’s dad) is peeved and feels Ginny is a mere distraction. However, the players seem to be secure and welcoming so far, even Lawson (Zack Morris!) the team captain. But unfortunately, just to her face. She later overhears him calling her a gimmick. She does have one true friend on the team who she played with in the minors:  Blip. No, that’s his name. Blip.

She takes the mound and flashes back to her father teaching her how to pitch a screwball. He knew she had the talent even then but would never be able to compete with men who could throw harder and faster because of biology. He is most definitely her inspiration and she flashes back several times throughout the episode to her big moments in pitching and he is always there.

But in the game, she’s totally blowing it! It’s like Wild Thing from Major League but not funny at all: she probably doesn’t just need some glasses. She asks to be taken out of the game. Then she’s back at her hotel and her dad comes and drags her down to practice some more after she blames him for her failed debut. She never wanted this! He made her pitch!

The manager wants to send her back down but the owner insists that he give her another try. Blip tells Zack Attack to stop being a dick and start being the captain Ginny needs. She takes the mound and throws a wild one. Zack comes out to the mound to give her the exact tough love motivation she needs and then she throws a fucking strike! Yeah BABY!

The show’s not over and a few other things happen that will play out in future episodes. But one important thing we learn is that her father is actually dead and she’s not really seeing him the stands and he didn’t really come and get her to go practice after the first disastrous game. He died in a car accident the same night a scout for the Padres came to watch her pitch.

I kinda got teary when they decided to take her out of the game…but that’s probably because I’m a girl 🙂  I plan to watch future episodes. 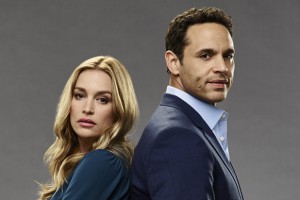 See her face? That’s the exact face I made the whole time I had to sit through this dumpster fire of a show.

Notorious takes everything that’s wrong and sad and misguided and lecherous and vapid and infuriating about this country and attempts to glamorize it. Because…why? I don’t know.

Thursday nights on ABC have been great as of late. It used to be the Grey’s/Scandal/Murder night. But Scandal isn’t coming out until January so ABC decided to replace it for the time being with this hot garbage.

What’s Notorious about? I don’t know. Attractive people doing terrible things. Like a soap opera. Piper Perabo, who you might remember from Coyote Ugly but it’s OK if you don’t, and Daniel Sunjata, who was good on FX’s amazing Rescue Me, play two assholes. She is a TV producer, he is a lawyer. I think they work together to make news happen and trick people into thinking things happened. They use people, they lie, they looks smug. Maybe by the end of the show they’ll become sympathetic but it’s not looking promising. I’m 15 minutes in and I already hate everyone that has spoken a word.

I think I just saw Julie Taylor from Friday Night Lights! What’s her name, Aimee Teegarden I think. That was a good show. But then I stopped watching it, I don’t know how it ended. I think they finally gave Kyle Chandler an Emmy for that show but I don’t think Connie Britton and her hair (“Hi y’all!”) ever won one.

Did you see that Amy Schumer skit that parodied FNL? It was brilliant. Jesse Klein wrote it. I love her. I read this piece she did in Esquire about men and cheating. She said she had a horrible dream about her husband cheating on her with Giselle Bundchen. She woke up and told him about it and he said, “Oh, honey. I could never do that to Tom Brady.” Hahahahahaha.

OK, let’s watch some more of this turd fest.

Here’s what’s going on. A rich guy left the scene of a hit-and-run. The kid he hit died. The rich guy and his wife are having marital trouble. The rich guy’s lawyer sleeps with his wife. Meanwhile, the producer finds out her boyfriends sleeps with prostitutes. Do I need to go on? Cause I really don’t want to.

And it’s only halfway over.

Pointless side stories? We got ’em. One is about a bartender extorting a politician for $100,000. One is about the host of the show having a mid-day sex romp in a hotel with some young hot black dude and the show’s P.A. needs to go deliver her some condoms and Bailey’s. This doesn’t come up later, by the way. It’s literally just in there. I suppose they wanted to make sure we knew that EVERYONE on the show was awful.

Here’s all I managed to write for the remainder of this pile of a show:

Thank God I get to watch The Exorcist tomorrow.