Night Five. We have come to the end. I don’t know how TV critics do this. We only had to watch five shows this week. There’s like 400 TV shows right now. And from what I’ve seen, not all of them are going to stick around. 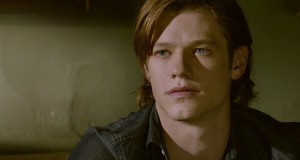 Lake Como, Italy. — MacGyver is attending a party with a bunch of bad guys and pretends to be a waiter so that he can break into the vault and open a metal suitcase and steal a glowing canister. He has a team supporting him. They’re all mic’d to each other and there’s flirting and good-natured ribbing. The one teammate is a woman working offsite in a room full of computer monitors and lots of beeps and flashing lights. The other is a guy waiting outside on the lake to help him escape. He trips an alarm but gets out of the party with the glowing canister. He jumps in his escape boat and ends up back at a white van where the woman was monitoring, only other bad guys have already gotten to her. They want that glowing canister back. He gives it to them, but they kill the woman anyway. She was his girlfriend.

Every time he does something, a written explanation flashes on-screen. He narrates, too. Here’s an example: when the bad guys came after him after he tripped the alarm, he picked up the tray that he was just earlier using to serve drinks and uses it as a shield. So the TV watchers don’t think it is just some regular tray the words “12 gauge stainless steel” pop up so we know the bullets can’t penetrate.

So, now he’s back at home and missing his girlfriend but needs to get back to work. That damn glowing canister had a deadly weaponized (Mac’s word, not mine) virus. But, he and his teammate need someone else who is as good at computer stuff as his dead girlfriend so they bust some computer hacker out of prison with a paperclip. The word “paperclip” flashes on the screen. That’s how I know for sure that’s how they got her out.

She doesn’t even have time to change out of her orange jumpsuit before heading to the office to dive right in to finding the bad guys who have the virus. So, they track the one bad guy down in San Francisco and he is with the dead (not dead) girlfriend! But Mac really loved her. So, he chases after her. She gets away, but they get the bad guy. She has the virus and is about to take off to NYC with it.

They chase her down to a private airport as the plane is taking off. Mac chases the plane down the runway on foot and jumps on it and manages to snip some wires forcing it to turn back around and land. I can’t believe I’m actually watching and writing about this. They confront her in the plane and learn she’s already sold the virus. 13 more minutes of this crap. I want to stab my eyes out with a “paperclip.”

I never saw The Exorcist. I know, right? What the hell kind of pop culture obsessed lunatic has never seen The Exorcist? Me, that’s who. I’m not huge into horror. I don’t seek it out, I usually don’t enjoy it. So imagine how delighted I was that Julie told me she was ABSOLUTELY NOT watching FOX’s new version of The Exorcist. Hurrah.

So, I don’t know anything about this. I think Geena Davis and Alan Ruck are in it from the :15 promo I saw but I don’t know for sure. I’m not going to take any notes. I’m just going to watch it alone in the dark. Let’s do this.

OK, so that was all right. There’s this super sexy Latino Catholic priest in Chicago. He’s sermon-ing, and in the congregation we see Geena Davis and Alan Ruck with their teenage (?) daughter. They all say ‘bye’ to him on the way out. I think Geena Davis slips him some money. He asks about some other person, presumably a sibling not in attendance.

And so simultaneously there are some flashback scenes to another priest, also sexy, performing an exorcism in Mexico City. It’s classic exor-stuff (i.e., the boils, the demon voice, thrashing). He eventually loses the kid when the kid’s head starts to spin around, only in very non-Linda Blair-like fashion, it actually just snaps like a normal neck would and he dies. Sorry Mexican possessed kid. We hardly knew ye.

But all of a sudden, Father Sexy is seeing this exorcism in dreams and tracks the exorcist down to a nearby Catholic retreat. He tells the exorcist what he’s seen. The exorcist is like “Oh brother, here we go again,” but much more dramatically.

Meanwhile, we learn that Geena Davis believes her daughter — the one who didn’t go to church — is in trouble and there might be a demon in the house. On a practical level, this daughter is home from a traumatic event. I think it was a car crash where one of her friends died. Also, Alan Ruck is sort of brain dead? I don’t know if I know why. Either way, Geena Davis is having a rough go of it as of late so I get wanting to blame Satan for your troubles.

Father Sexy finally agrees to help Geena Davis. He goes to the house and crazy shit starts happening. And this is where we find out that it’s actually the other daughter, the good one, the happy one, the one who went to church, who is possessed. And she is like wicked frickin’ possessed.

There was some fun scary stuff toward the end. Not a lot in the beginning or the middle, but a lot of creepy attic stuff with twisted bodies and rats and all kinds of scary bits. I liked it a little. At the end, we see the exorcist suiting up for work, presumably on his way to Chicago to help Father Sexy and Geena Davis.

So, I don’t know. I guess it was good. I guess it could be fun to tune into every week. I liked the first season of American Horror Story. It seems like forever ago, what was it about? Dylan McDermot Mulruney and Connie Britton had a haunted house or something? I don’t remember.

So, sure. Why not. Watch The Exorcist. What the hell do I care.