Not all Fall TV Shows premiere in the same week. CBS saved three of its best (?) for the last week in October. We saw two sitcom offerings and one drama last week. As always, I enlisted the help of Guest Reviewer and Kevin James Fan Club Member Julie Miller. She and I watched Pure Genius on a sort of conference call together. I subjected myself to the solo torture of The Great Indoors.

And as a special treat to all of you, a brand new Guest Reviewer debuts this week. Andy Leonatti, an old grad school friend of mine, volunteered to watch and review Man With a Plan. Well, “volunteered” might be a strong word. He agreed to watch it because he loves me deeply.

So, here we go. Three new offerings from CBS, in order of their debut. First, Andy’s review of Man With a Plan. And as a word of warning, this review is NOT SAFE FOR WORK. Enjoy.

Man With a Plan – CBS

So I just finished watching the sure-to-be-a-new-hit show Man With A Plan. How do I know it’s sure to be a hit? Because I was actively repulsed by this show.

Save the spare rerun of Everybody Loves Raymond (mildly funny to not good)  or The Big Bang Theory (terribly unfunny) that I catch while visiting my parents (because you know why), this is probably the first CBS show I’ve watched all the way through in years. Many, many years. I was right to stay away. Never agree to anything Randy asks you to do. Randy sucks.

The show focuses on a dad (Matt fucking LeBlanc) in Pittsburgh (Pulled that one out of a hat didn’t we, CBS?) who has to take on more of a parenting role to his three children when his wife decides to go back to work. That’s it. A fucking dad has to be more of a present parent. (I’ve already forgotten his character’s name because I don’t care.)

This is run-of-the-mill older (and old-school) dad is out of place in the modern world. Oh shit!! The kids spend all their time on their devices!! There’s a stay-at-home dad!!

That was a particularly galling moment, by the way. The stay-at-home dad is portrayed as a major league wiener compared to Joey. He cries. OH MY GOD! Fuck you, I cry. I don’t have kids either. I cry and SOMEHOW my wife still wants to have sex with me.

And, at least not in this episode, he’s not even becoming a full-time stay-at-home dad. He owns a contracting business. Basically he’s going to take the kids to school, pick them up and do some activities at school. And he spends the whole episode complaining. He even has the nuts to say “What the hell has happened to my life?”

At another point, he’s trying to make a point (again, I don’t remember what it was and I don’t care) and he says that water is free. NEWS TO ME, JOEY.

The stay-at-home dad character is a tad offensive. But otherwise, I’m actually a little torn about why I hated this so much. Shows like this that portray the typical dads as buffoons piss me off. Typical dads are Randy. And Randy’s a damn good dad. Dads WANT to spend time with their kids, warts and all. But then I realize that stuff like this gets focus grouped to death, and that there are a lot of dudes out there who probably identify with this character. That makes me sad. Can’t we demand a little bit more as a society? The answer is no.

Actually, the most offensive part of this show was the laugh track. It was constant. We need to have a discussion as a society about laugh tracks. 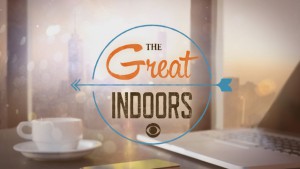 Oh, millennials. Isn’t it a joy to make fun of entire generations of people? And young people, amirite? They’re the WORST. That’s the core concept behind The Great Indoors.

Joel McHale plays Jack Gordon, a legendary Adventure Reporter for an outdoor magazine called Outdoor Limits. The magazine has fallen on hard times so they’re pulling Jack off the mountain and putting him in an office filled with Digital Media experts. You know, millennials.

The show wastes no time getting to the point and then beating you over the head with it: millennials are terrible people: a few highlights:

And then there’s Jack. The show goes to great lengths to show how out of place he feels among these young people: he faxes his resume, he references Blade Runner. And he makes fun of everyone and everything around him.

He’s a dinosaur, you see. The world is changing, and he’s scared. So he does what most dumb, panicky animals do when they’re scared. He lashes out.

And I’ll bet good money that a lot of you do the same thing. CBS is hoping you do. They’re banking on it. This whole show is based on the notion that 20-somethings are a bunch of narcissistic nancies who deserve your scorn. But you know what?

That’s what pisses me off so much about this show, and the treatment of young people in general. They want safe spaces, they’re easily triggered, they’re gender-fluid. “What a generation of delicate softies, what a collection of pussies,” we say to ourselves. Well pardon my whatever but WHAT THE HELL DID YOU THINK WAS GOING TO HAPPEN.

And what do we do when they grow up expecting a world uniquely tailored to them? We chastise them for being entitled. Jeez, people of my generation, have some accountability.

Get off your high horse, CBS. The kids are all right. While you’re busy making fun of them and lamenting the collapse of society as we know it, they’re busy building a new one, using the technology you’ve given them to create a world unlike one we’ve ever seen.

Just change your slogan to “Get Off My Lawn” and put Matlock back on the air. 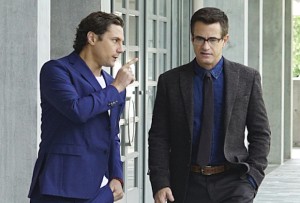 I don’t like hospital dramas or hospitals or doctors or anything that is about blood or sick people. It all started with not liking biology class in the 9th grade I think. So it is really Mr. Kelly’s fault. He made his own soap and used it, too.

The billionaire is such a punk. He goes around second guessing and undermining the doctors but I guess they put up with him because he put a fun vintage popcorn cart in the OR.

My only comment to Randy while we were watching the show was that besides it being really silly my biggest problem with a show like this is that it manipulates people who are facing dire medical nightmares. I know we are making breakthroughs all the time but I’m pretty sure it is a long time before we can strap beeping, flashing headbands on and wake up someone who has been in a coma for six months by thinking about Africa really hard.

Yes, she’s basically right about everything. The doctors are sexy, the technology is ludicrous and laughable. The conceit itself is maddening. And I don’t remember that particular fact about Mr. Kelly but I totally believe it.

This is a by-the-numbers CBS medical drama, so if you’re into that you’re going to TOTALLY be into Pure Genius. Go get ’em.