Showmanship and intensity, pride and dedication. Those weren’t the only things we had going for us.

Marching bands have a professional circuit of sorts. It’s called Drum Corps International, or DCI. The corps are populated with insanely talented individuals who put on jaw-dropping displays of musicianship.

They’re entertaining, but they’re never funny. Except for the Velvet Knights. They were funny. They played silly songs, wore goofy outfits, and entertained the audience. It was cool, but they never won, and they only cracked the top ten a few times before they folded in the mid-’90s.

Now, I never talked to Blake about this, so I can only offer conjecture. But one of two things had to be going through his mind when he formed the indoor line. Either he realized that we could never compete with larger schools on a raw talent level, so he turned to a more light-hearted, crowd-friendly approach. Or the man’s just a born entertainer. Because Lock Haven’s shows were unlike anything else out there. We were the Velvet Knights, only we actually won things.

Blake chose a theme for each indoor season. The first two years — the ones I wasn’t there for — were Disney music and ’50s music, respectively. I’ve seen the grainy tapes of each show. When you watch them, you can tell that this was a new experience for everyone involved. Blake, I believe, was writing all the music and the drill by himself, which is a monumental task for someone who was basically doing this in his free time. The shows were simple, but they were fun.

The kids were there to entertain, to play songs people knew and make them laugh in the process. It may have started out a little rough, but you could tell they were improving. The ’50s show was more polished than the Disney show, and by the third season (my first season), the drumline had a defined personality, an identity. In a word, performance. 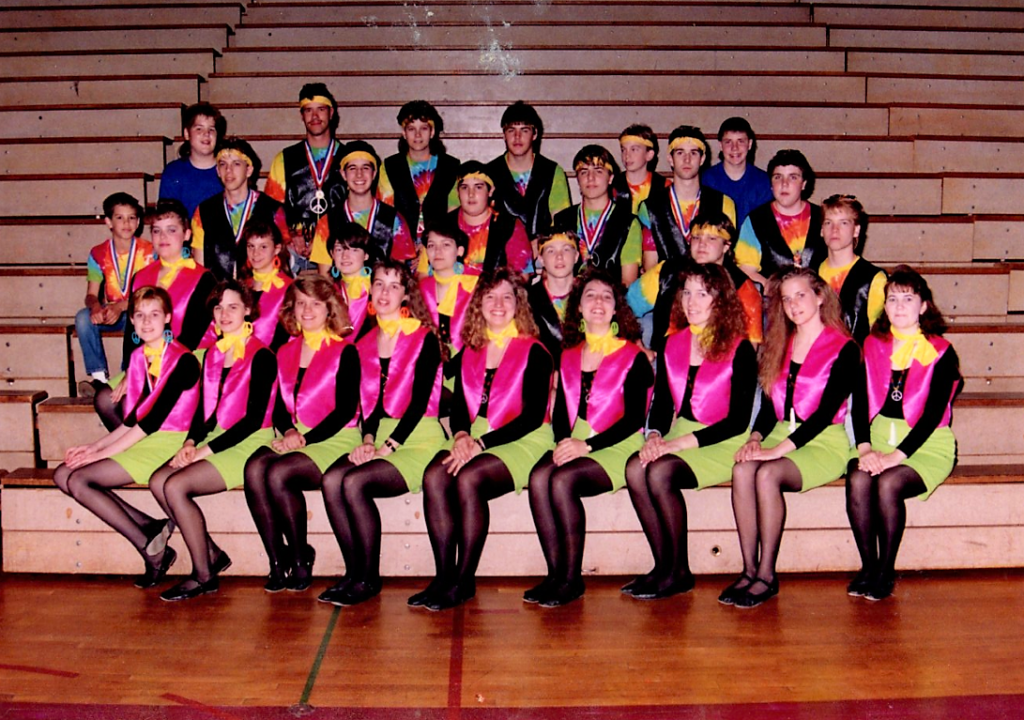 We did Beatles songs my first year. We opened with “Sgt. Pepper’s Lonely Hearts Club Band,” followed by a goofy version of “Yellow Submarine,” a beautiful rendition of “Hey Jude,” and we closed with “A Hard Day’s Night.” There was a definite hippie vibe to the production. Our “uniform” was ripped jeans, tie-dye shirts, fringed vests, bandannas, and John Lennon sunglasses.

And it was so, so colorful. Neon colors and day-glo paint covered the court. We taped peace signs to the bass drum heads. There were giant fish, kids in bright yellow raincoats, huge colorful flags and backdrops. Imagine sitting in the bleachers all day, watching drumline after drumline take the floor and bang out some obscure piece of music. They’re wearing band uniforms, they’re not smiling.

And then out we come, like a bunch of stoners and a cloud of smoke spilling out of a Volkswagen van. There was an excitement in the air when we were on the floor. We could sense it from the court, and we fed off of it. Our parents and the girls in the majorettes and color guard always cheered for us, but we also saw parents from other schools gesturing to each other, pointing things out, laughing, clapping, offering up support and letting us know they appreciated what we were doing. That kept us running. At some point that year, there was a collective realization that we had tapped into something truly different. It felt like sitting in the eye of a hurricane, watching everyone around us marvel at what we were doing. It was wild.

If you’re not familiar with performing in front of a crowd, believe me when I tell you that positive feedback is a game changer. Technically, it shouldn’t be, and we were taught to not let the audience’s reaction affect our performance one way or another. I remember one time after a particularly bad show, I tried to excuse it by saying something like, “Well, the crowd just wasn’t into it.” Blake looked right at me and in front of everyone said, “So?” He was right, of course. I didn’t want to hear it, but I knew he was right. You do your best, you perform with intensity and focus no matter what the audience is doing.

We brought crowds to their feet. People who had never heard of Lock Haven before we hit the floor were standing and clapping by the time we left. You’d have to be a robot to not let those kinds of reactions give you a little boost. Feeling that kind of energy from the stands as you perform makes you want to work even harder for them. You tighten your performance, snap your wrists, give a purpose to every movement.

Those moms and dads — the bleacher-sitters — the folks who were giving up their Saturday afternoons to sit through dozens of performances just to watch their kid perform for five minutes? THAT’S who we performed for. We wanted to be the best thing they saw all day. On their drive home, we wanted those people to say, “That Lock Haven drumline put on a hell of a show.” That’s how you make a name for yourself, and that’s exactly what we were doing.

Chapter Six – Yes, But Can They Play