When you’re out tonight, five pints deep and looking for a reason to toast, raise a glass to Margaret Hamilton. Not this one, although I’m sure she’s a fine woman. I mean the other Margaret Hamilton. The one who put a man on the moon.

Today is Women’s Equality Day. 96 years ago, the 19th Amendment was certified as law, giving women the right to vote. Every August 26 since 1971, we take a moment to celebrate the notion that women have achieved something resembling “equality” in this country.

There’s a good chance your feed will be filled with arguments about equality today: whether it exists, what it means to be a feminist, how far we’ve come, how far we have to go. There will be talk of Hillary Clinton, Gloria Steinem, Margaret Sanger and Susan B. Anthony. And that’s all fine and good, but we do things differently over here. After all, it’s Friday.

And on Fridays, we raise a glass.

Tonight, raise a glass to Margaret Hamilton. But before you do, raise your eyes to the stars. Remember that we landed on the moon in the summer of 1969. And it turns out, the person who directed the team of engineers that implemented the software that got us there was a woman named Margaret Hamilton.

How do we not know that? How do we all not know about this woman who was so integral to such a monumental achievement? Let’s remedy that right now.

Margaret Hamilton graduated high school in 1954 and went to college to major in math. Can you imagine? Even today, when female students outnumber their male counterparts on college campuses, only 40% of them major in math. I imagine the figure back in 1954 was probably closer to…four percent? I don’t know, I’m not a math major.

After college, she and her husband moved to Boston. She taught for a while to support him while he got his degree. She planned on getting a PhD in Abstract Math after he was done. But then MIT came calling. In 1960, she was asked to join the meteorology department to write weather-predicting software. “Software” as we know it wasn’t really a thing at that time. There was no curriculum, no field of study dedicated to software engineering. And  programming still meant punch cards. Stacks and stacks of punch cards.

Hamilton with her stacks and stacks of punch cards.

So she learned on the job, teaching herself to code by transforming her knowledge of math and algorithms to system programming. As more and more people came to the discipline, she was already viewed as an expert: partly by just being in the right place at the right time, and partly because of her ridiculous level of talent.

After only a year in the meteorology department, she was recruited to work on another project at MIT called Semi-Automatic Ground Environment (SAGE). The project coordinated data from radars all over the country to produce a single unified image that allowed us to see our entire airspace. SAGE used the largest computer ever created, the Q7. All told, it took up about 22,000 square feet of real estate. That’s half an acre. Seriously. The systems Hamilton helped create are still in place today. We don’t call it SAGE anymore, though. We call it NORAD.

Hamilton’s work on SAGE caught the eye of the MIT Instrumentation Lab, which specialized in the development of advanced technology to solve national security and energy problems. They had recently been tasked with a pretty big project: The Apollo Guidance Computer (AGC). President Kennedy had just launched the Apollo Space Program and they were going to need a computer on-board to get them to the moon and back. Hamilton was asked to implement the software that would run the AGC. She was only 27 years old.

The AGC was to be the world’s first portable computer. Computers at that time, as I’m sure you know, pretty much looked like this: 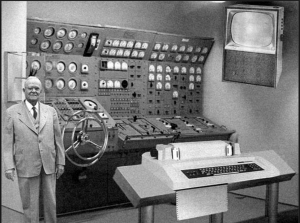 Is that…is that a steering wheel?

The thought of a portable computer that could fly through space must have seemed like fantasy at the time, but they did it. The MIT Instrumentation Lab created two 70-pound computers, one for the Command Module (Columbia) that piloted the astronauts into orbit, and one for the Lunar Module (Eagle) that landed them safely on the moon. Each machine had its own software program to run: COLOSSUS controlled Columbia, LUMINARY controlled Eagle. Hamilton’s job was to coordinate the two. Basically, she was in charge of all the on-board flight software.

The idea of software as a field of study was still in its infant stages. We now know it to be the glue that holds our world together, the interface between man and machine. But when the original Apollo engineering documents were laid out, the word “software” wasn’t even mentioned, and there were zero dollars in the budget for it. Software Engineering just wasn’t taken seriously by Computer Engineers.

But things changed. Apollo engineers began to recognize a huge need for error detection and response. Hamilton and her team simulated every possible scenario over and over. As unmanned missions came and went and the Apollo program grew closer and closer to its first manned mission, it became clear that Hamilton’s software engineering team would be crucial to a successful landing. By the time Neil Armstrong set foot on the moon, her team had grown to almost 400 people, and the computer industry had been changed forever. Pretty cool.

So there’s your toast for the night, ladies and gentlemen. To Margaret Hamilton! The woman who put a man on the moon.