Ah, guns. Man do we love our guns. There are nine guns for every ten people in America. Poor tenth guy. So alone, so defenseless.

The U.S population is just under 320 million, yet only one in three of us own a gun. If my math is correct, that means each gun owner owns three guns. One for shooting deer, one for protecting the house, one to…protect the other guns, I guess. Safety in numbers! 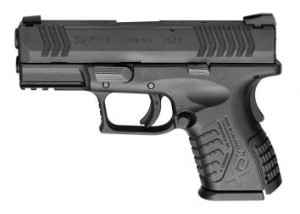 Usually on Tuesdays, I take an issue and show you what each of the four presidential candidates has to say about it. But we’re going to do things differently today. Basically because there’s absolutely no way I’m going to be able to stay neutral on this one. I’ll try and provide reasoned analysis, but I can’t pretend like I don’t have an opinion, not on this one.

As far as I can tell, guns are the only readily available commercial product protected by the Constitution. Our relationship with guns was forged in a revolution, cemented in wild west mythology, and lives on today as some mixed up, murky marriage of the two.

We are a divided nation when it comes to guns. (Also, on everything else.) The division is evident in the way in which the two major party candidates title their gun platform web pages: On Hillary’s site, it’s called “Gun Violence Prevention.” On Trump’s site, it’s called “Second Amendment Rights.”

Right away, before the conversation even has a chance to start, we’re already talking about two different things. Is there no way to reconcile both concepts simultaneously? Must you be either for gun violence prevention or for the second amendment?

At no point in Obama’s administration, in the midst of all these mass shootings, has the second amendment come under attack. Remember Sandy Hook? All we managed to do was propose an assault rifle ban and a universal background check law. They were both shot down. Pun intended.

Binghamton. Fort Hood. Aurora. Charleston. San Bernadino. Orlando. 279 cases in ten years. Tell me ONE THING that has been done on a federal level to attack the second amendment. You can’t, because no one is coming to take your God damn guns.

So why all the paranoia? In 1999, most people said hunting was their main reason for having a gun. Now it’s protection. What are we so afraid of?

Mass shootings are terrifying, this is true. We’re all terrified that it could happen in our town, our office building, our Christmas party, our kid’s school. But this is where the two sides seem to diverge drastically: whenever I watched one of those events unfold, never once did I think, “Gee I wish there would have been more guns there.”

Let’s look at the second amendment, edited by Tommy J. himself:

“A well regulated militia being necessary to the security of a free state, the right of the people to keep and bear arms shall not be infringed.”

As much as I wish “well regulated” meant “government regulated,” it doesn’t. In the parlance of the day, well regulated just meant working properly. However, the law is not an absolute. Even Scalia had to accept that convicted felons and the mentally ill should not have guns. So it is open to interpretation. But that’s the tricky thing about interpreting the founders. Things were different then. 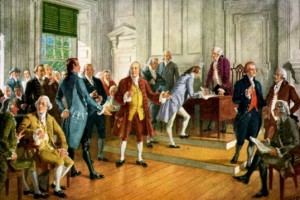 Those white boys had a lot on their minds at the time. This was colonial America. We were fresh off a conquering power that invaded our homes and controlled our livelihood. Keep in mind, in the third amendment, right after he talks about guns, he talks about quartering soldiers, and I KNOW the first time you saw that you were like, “Uh what. We used to have to let soldiers, like, live in our house?” It’s impossible to fathom, but that’s the world in which they were living.

So yeah, totally. I get it. A well regulated militia was necessary to the security of a free state. That made sense then. Does it make sense now?

Well hello, paranoia! Welcome back to the conversation!

Yes, I suppose there’s always a chance the government could choose to…I don’t know, invade your town? But that’s the kind of world reserved for the most deeply paranoid among us. I don’t pay much attention to fringe theories, but I did used to listen to Mark Levin for fun. He’d get so angry and shouty. Adorable. The ads that came on during his show were fascinating. There’s this whole cottage industry built on bunkers and survival gear. So yes, there are people who think the government could still come and get them. And they want to make sure they have their guns when that day comes.

What can we do to put their muddled little minds at ease? These people are just terrified to leave the house, and people like this just keep giving them more and more reasons to be scared. Just making shit up. There’s no bravery in their paranoia. That’s not being patriotic. It’s just weakness.

The Company We Keep

Trump’s website claims that “we are the only country in the world that has a second amendment.” I think he means that we are the only country that constitutionally prevents our government from infringing on our rights to own a gun. He says this like it’s something to be proud of. If it were true, wouldn’t it only serve to further drive home the point that our obsession with guns is singular and, therefore, maybe not something to crow about?

It doesn’t matter, because it’s not true. It’s just not. It’s on his site, he probably says it all the time, but it’s not true. We are not the only country with constitutionally protected gun ownership. We are joined by Haiti, Guatemala, and Mexico. You know, the countries you definitely want to be on a short list with. Kinda like how we’re fifth in executions, joined by another group of folks we probably shouldn’t be hanging out with. 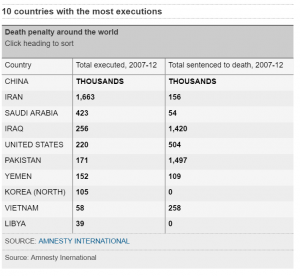 I like how China says “thousands.” Like, “We don’t even know how many people we killed, but it was a lot.”

Trump points to this program on his website and spends a lot of time talking about. It started in Virginia (Tim Kaine was a big part of its inception, by the way). It was designed to make illegal gun possession a federal crime with a mandatory five-year sentence. It’s interesting that they would target that specific crime: illegal gun possession. But I think you’ll see why in a minute. Trump calls Project Exile “a success” and says we shoud have more laws like it. NRA Executive Vice President Wayne LaPierre also praised it, saying it would “leave the good people alone and lock up the bad people.”

Did Project Exile work? Yeah, kinda. It put the bad guys away. However, the “bad guys” in this case were mostly “black guys.” Does that mean the program is racist? I don’t know. Project Exile targeted black neighborhoods because that’s where the illegal guns were. So who’s to say.

Regardless, when Trump calls a program like that “tremendous” and makes plans to replicate it across the country, he’s essentially patting himself on the back for being tough on crime without ever really addressing the issue. Putting bad guys in jail doesn’t solve the problem; it just addresses a symptom.

What about the more nuanced question of why there is so much black on black crime to begin with and what can be done to prevent it before it happens? Project Exile locks up bad guys. But it does nothing to solve gun violence in America.

All right, this is too long already and I haven’t even gotten to Hillary. We’ll talk about her next time. Probably tomorrow.